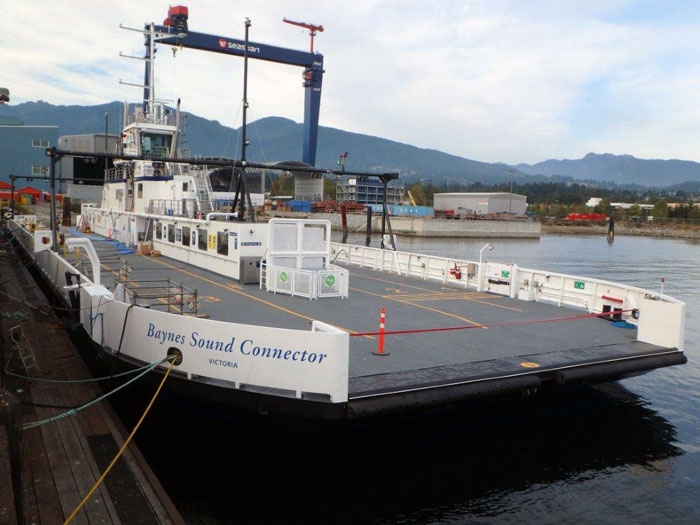 AUGUST 26, 2015—BC Ferries’ cable ferry, the 150-passenger, 50-vehicle Baynes Sound Connector, was expected to be towed from Seaspan’s Vancouver Shipyards in North Vancouver last night to arrive this morning at Buckley Bay on Vancouver Island. When it enters service this fall, it is expected to be the longest cable ferry in operation—about 1.9 km.

“This is major milestone for the cable ferry project as we get another step closer to introducing our newest vessel, the Baynes Sound Connector, into service on the Buckley Bay–Denman Island route,” says Mark Wilson, BC Ferries’ Vice President of Engineering.

Brian Carter, President, Seaspan Shipyards says the shipyard was “honored to construct BC Ferries’ first ever cable ferry and we look forward to continuing our successful partnership with them on future vessels.”

The Baynes Sound Connector will be connected to the three cables that have already been laid.

In August and September, BC Ferries’ crews will undergo extensive training and familiarization on the cable ferry in preparation for passenger and vehicle service. After receiving certification from Transport Canada (including final crew complement) and classification society Lloyd’s Register, the cable ferry will enter service this fall.

The vessel will be based at the Denman West terminal.

BC Ferries expects the cable ferry will save it over $80 million over its projected 40-year service life. The projected savings are based on a smaller crew, lower fuel consumption, lower maintenance costs and more reliable service.

The 78.5m Baynes Sound Connector will operate with one drive cable and two guide cables. It is capable of speeds of 8.5 knots with a normal service speed of 7.5 knots.

Under contract to the Province of British Columbia, BC Ferries is the service provider responsible for the delivery of safe, efficient and dependable ferry service along coastal British Columbia.