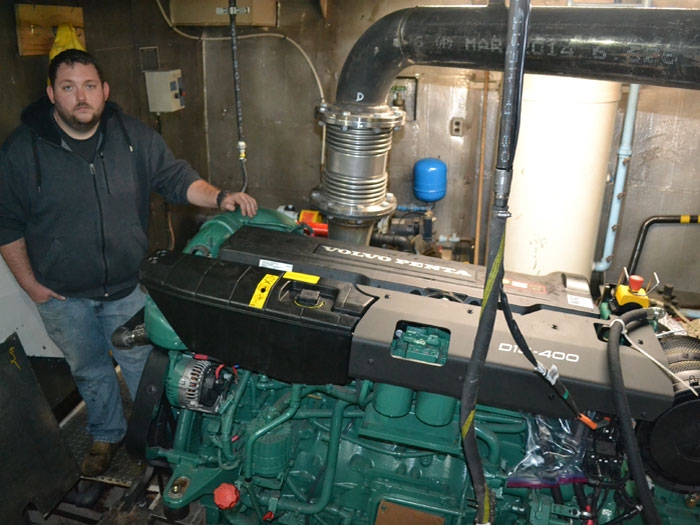 JANUARY 29, 2016—For a second consecutive year, a seven-man crew, led by Joseph Craine, owner and president of Lake Erie Ship Repair and Fabrication (LESR) based in Jefferson, OH, has repowered a Maid of the Mist boat.

With its maiden voyage in 1846, Maid of the Mist is one of North America’s longest-running tourist attractions.  The iconic boats transport guests from a boarding facility in the Lower Niagara River to the base of Niagara Falls.

The install was completed in late December 2015 with initial, successful start up of the engines conducted in January 2016.

A year ago, Maid of the Mist VI was repowered.  The projects were very similar according to Mitch Cassidy, project manager for LESR.  “The biggest difference between this year and last year is the addition of SKF Vibracon mounting chocks,” he said. “These chocks allow us to align the engines with the propulsion shafts without using traditional shims. Instead of unbolting the engine and lifting it back up to add another shim, we simply removed the weight from the chocks and spun them one direction to gain height and the opposite direction to lower the engine down.”

While no two boats are identical, Cassidy said there have been only minor differences with the installation of the new engines.  “The biggest difference has been with the weather, not so much the work. By this time last year, we were buried in snow and that added more difficulty to everything that was done outside. This year we have been very lucky.  We actually finished more than two weeks ahead of schedule and the weather has definitely played a part in that.”

“Smooth” has been the response from Maid of the Mist captains to the new engines installed last year, Cassidy says.  “Everything we’ve heard from the captains and the rest of the crew has been positive. The captains were very happy with the performance of the engines and the new electronic controls. One of the words we have heard repeatedly is ‘smooth,’ which is especially important in this operation. With so many passengers on board (1.4 million passengers boarded the two boats in 2015) smooth operation from the engines and transmissions is crucial for ride comfort.”

Jon Schultz, Maid of the Mist Vice President for Operations, says he is “very pleased” with the updates to the vessels.  “Lake Erie Ship Repair crews really know our boats inside and out,” says Schultz.  “They completed the job, oftentimes under some pretty difficult conditions, and we now have state-of-the-art engines in Maid of the Mist VI and VII.”

Cassidy gives high marks to the engines and transmissions.  “They were excellent last year. Volvo Penta manufactures a great engine and Twin Disc transmissions are known for their quality and durability.  Maid of the Mist is also working with a great engine supplier, Johnson & Towers, and having that support during the season is crucial to successfully operating the boats.”

“We really enjoyed working with the Maid of the Mist Corporation on the re-power again this year,” says Joseph J. Craine, President of LESR.  “They are top tier operators which other companies should model themselves after.”