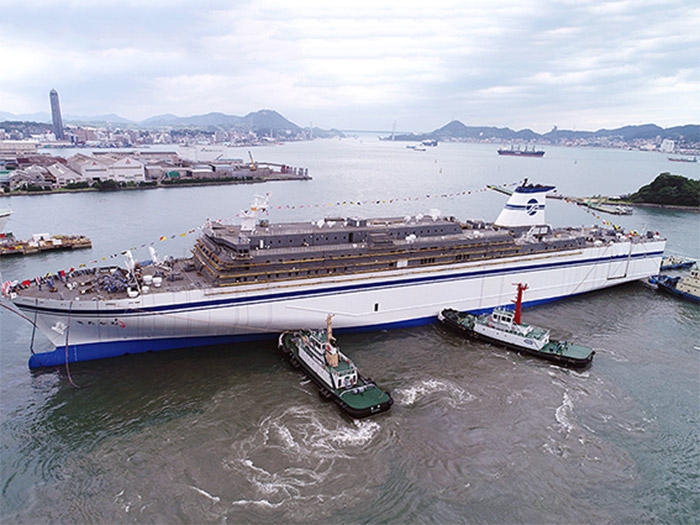 JULY 5, 2018 — A 192.5 m ferry christened and launched yesterday by Mitsubishi Shipbuilding’s Yokohama, Japan, shipyard, has a “space travel” interior design theme. Named Kitakami, the vessel is being built for Taiheiyo Ferry Co and will replace current Kitakami, one of three large ferries providing regular service between the ports of Nagoya, Sendai, and Tomakomai (Hokkaido). After completion and delivery in January 2019, the new ferry will initially head to port in Nagoya.

In view of the ferry’s operation schedule, where passengers board in the evening and travel overnight, the ship was designed to suggest travel through a star-studded sky. To create passenger accommodations that, though compact, offer outstanding comfort and enjoyment, the large shared cabin provided on the existing ferry has been replaced by private cabins and a number of rooms with capsule-type beds.

Construction of the new Kitakami ferry began on September 7, 2017.

The five vehicle decks have capacity to hold 166 trucks and 146 passenger cars. The sixth and seventh decks are the passenger decks, with accommodations for 535 persons and facilities that include a restaurant and a large public bath offering outside views.

The ship has a new optimal hull design delivering an approximately 10% increase in energy efficiency.