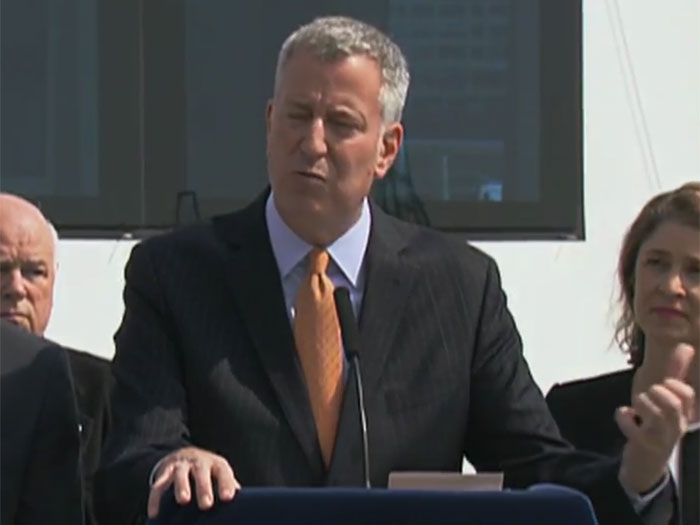 MARCH 17, 2016 — New York City Mayor Bill de Blasio yesterday announced that Hornblower, Inc. is to be the operator of the new Citywide Ferry Service, which is on track to launch next year.

The first citywide ferry system in more than a century will be priced at the cost of a single subway ride, and operate from 21 landings across the city. When fully operational by 2018, Citywide Ferry Service will operate an estimated 4.6 million trips per year across six routes, providing new transportation to communities where housing and jobs are growing fast. It will fully integrate the East River Ferry, resulting in lower fares for its 4,000 daily riders.

The new service is getting substantial financial support from New York City, which is investing $55 million in infrastructure upgrades, including building  ten new ferry landings and rehabilitating six others. Barge construction is currently underway at a facility on Staten Island.

The city is also providing $10 million for additional startup costs, such as vessel upgrades and ticketing machines.

The city has negotiated an option with Hornblower to acquire at least 18 state-of-the-art, highly efficient passenger ferry vessels, allowing for greater operational flexibility and providing significant savings to taxpayers over the life of the service (roughly up to $5 million per year), according to the mayor’s office.

The city will receive a portion of fare-box revenue if ridership exceeds 5.6 million passengers and the Mayor’s Office says that potential sponsorships would offset operating costs.

“For the price of a single subway ride, tens-of-thousands of New Yorkers are going to have a new public transit option linking them to jobs, education and opportunities across the city. It’s going to be a commute like no other: fresh air, harbor views and a fast ride on the open water,” said Mayor de Blasio. “We are selecting an operator with an incredible track record providing service in our harbor. We look forward to launching with Hornblower next year.”

“Hornblower is honored to take the helm of Mayor de Blasio’s vision for a more integrated transportation network that will make commuting and connecting easier,” said Terry MacRae, CEO of Hornblower. “We have already begun work to deliver a ferry system by the summer of 2017 which will revolutionize the way New Yorkers work, live and play, and we are confident this new system will become a local favorite for decades to come.”

Hornblower has operated in the New York Harbor for a decade and carries 13 million passengers every year, more than any other private ferry service on the City’s waterways. Hornblower, a longtime union employer, currently employs more than 450 people in the New York Harbor. The Citywide Ferry Service will generate at least 155 new jobs in the Harbor. Crew will earn wages above $15 per hour, along with a comprehensive benefits package.

As part of the service, Hornblower will be delivering at least 18 new boats, which will be equipped with WiFi and engines that meet the highest EPA standards. All docks and boats will be accessible to people in wheelchairs and fully compliant with the Americans with Disabilities Act.

The selection of Hornblower is the result of a year-long competitive procurement by the New York City Economic Development Corporation. Following the announcement of the Citywide Ferry Service in the Mayor’s 2015 State of the City Address, NYCEDC issued a public RFP seeking one or more private operators to provide the Citywide Ferry Service. NYCEDC received multiple responses and selected Hornblower on the basis of its ability to provide the highest quality service at the best value to taxpayers.

Over half a million New Yorkers live within a half-mile of one of the 21 Citywide Ferry landings, including 15,000 families living in NYCHA developments.