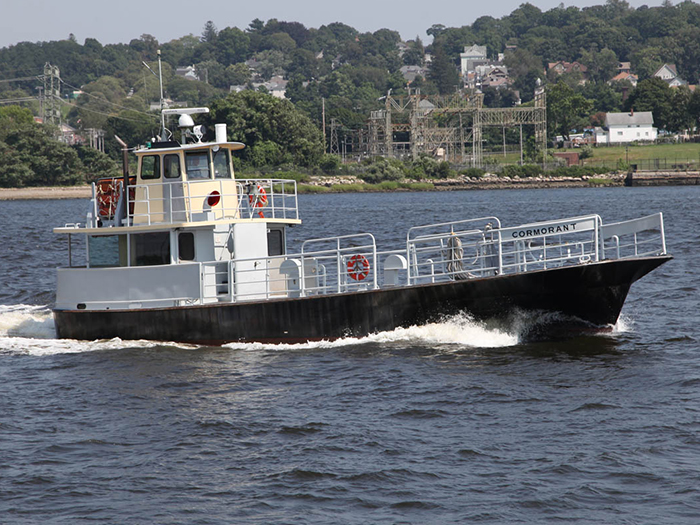 Gladding-Hearn Shipbuilding, Somerset, Mass., has just completed a four-month refit of the Cormorant, a ferry that it delivered in 1979. Since then, the vessel has logged thousands of miles under its keel ferrying passengers from Woods Hole, Mass., to the private island of Naushon, part of the Elizabethan Island chain south of Woods Hole.

Pret Gladding, a co-founder of the shipyard, designed the 56 ft, 49 passenger ferry for the Naushon Island Trust.

“It was a real pleasure to work on one of Pret Gladding’s last scratch designs,” said Peter Duclos, the shipyard’s president and director of business development. “The ferry is very well maintained and still perfect for the application, so definitely worth the re-investment.”

Along with installation of a pair of new engines, gear boxes and exhaust system, the vessel received numerous other upgrades. Portions of wasted hull plating were replaced. A significant portion of the electrical system was replaced and updated. Various mechanical systems were repaired or replaced, including the bilge, fire fighting and heating systems, and drip-less shaft seals.

The ferry’s control console in the wheelhouse was modified to accommodate new engine displays.

Given the changes to the vessel, the U.S. Coast Guard required that it be brought up to current stability standards, requiring a full inclination experiment and, ultimately the addition of fixed ballast to offset the lighter machinery package.

“For a small vessel she has a very complex series of stability conditions to cope with her multi-faceted mission,” said Duclos. “We are very happy with the outcome. The vessel is significantly quieter, cleaner and greener than she was before. Our in-house design and naval architecture team did a great job.”