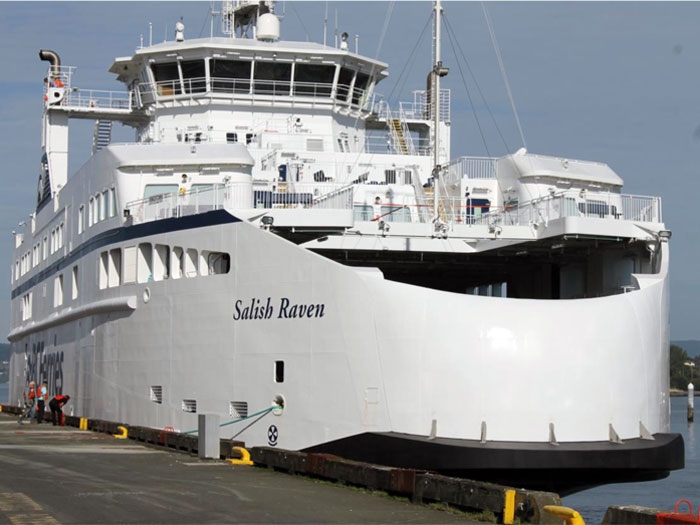 JUNE 14, 2017—While the U.S. has yet to add an LNG-fueled ferry to its fleet, Canada continues to build its credentials. The latest is the Salish Raven, the third of three dual fuel ferries for BC Ferries that will have the ability to burn Liquefied Natural Gas as a fuel, recently arrived after a more than 10,440 nautical mile journey from Polish shipyard Remontowa Shipbuilding S.A.

Like its sister vessels, the Salish Orca and the Salish Eagle, the Salish Raven is 107 meters long, with the capacity to transport 145 vehicles and up to 600 passengers and crew. The 8,278-gt ferry is powered by three Wartsila 8L20DF engines.

The three vessels are part of a huge capital investment plan by BC Ferries to upgrade its fleet and retire aging tonnage. BC Ferries contracted Remontowa Shipbuilding to build the three LNG-fueled ferries at a cost if C$165 million in July 2014. The new vessels will allow the retirement of the Queen of Burnaby and the Queen of Nanaimo.

After its arrival on June 7, the Salish Raven sailed to BC Ferries’ refit facility in Richmond to prepare for service in the Southern Gulf Islands this coming fall.

The Salish Orca has already entered service in May on the Powell River-Comox route and the Salish Eagle will start service on the Tsawwassen-South Gulf Island route later this month.

Earlier this year, Seaspan added two 148.9m dual-fuel hybrid ferries, the Seaspan Swift and Seaspan Reliant, which were designed by Vard Marine and built in Sedef Shipbuilding in Turkey.

The first dual fuel ferry in Canada was the 130m F.-A.-Gauthier, built by Italy’s Fincantieri for STQ in Quebec.