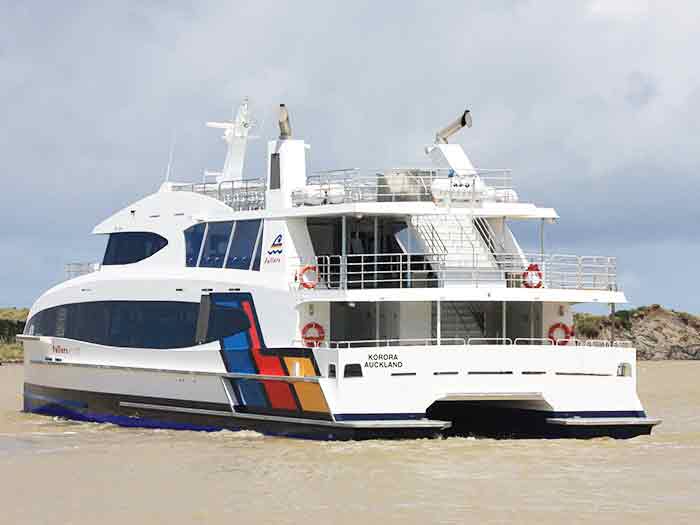 Korora is the second vessel built for Fullers Group by Q-West, with a third currently under construction and is based on near-sister ship Te Kotuku, built in 2014. However, it was decided in the early stages to increase passenger capacity which required significant modifications to the vessel’s machinery and layout. The vessel was also modified to allow for a variety of different berthing options.

The design changes include the addition of a sundeck and an increase in passenger capacity to a total of 401. The main deck features seating for 178, a large café, luggage racks and wide access doors. Also fitted are two toilets (one of which is handicap-accessible) and racks for 14 bicycles.

The wheelhouse retains an asymmetric configuration, designed in consideration of the local operational requirements. The frequently used starboard wing control station is enclosed for protection from the elements, whilst the port side is dedicated to crew access via stairs to the foredeck, which houses palletized cargo and a deck crane.

The vessel is propelled with conventional fixed pitch propellers and demonstrated an average speed of 29 knots at 85% MCR with typical deadweight during sea trials.

A dry exhaust system is fitted which along with the engine room air outlets, exits high above the upper deck. This configuration, which reduces corrosion and fumes and noise in passenger areas, is typical of vessels in the Fullers’ fleet.

Korora will be joined by a sister ship in 2017, bringing Fullers’ fleet of this class vessels to three.