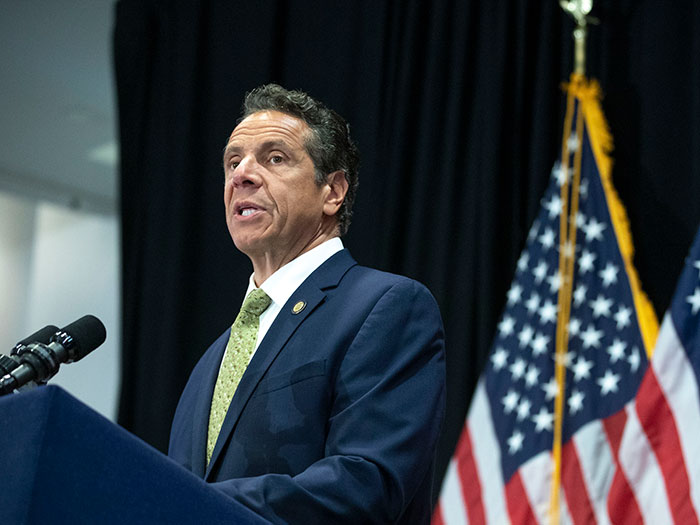 New York State Governor Andrew M. Cuomo yesterday signed into law the Climate Leadership and Community Protection Act, or CLCPA, which sets the state the goal of achieving a carbon free electricity system by 2040 and 85% reduction in Greenhouse Gas Emissions by 2050

To jump-start progress towards these targets, which include 9,000 megawatts of offshore wind by 2035, he announced the winners of New York’s first comprehensive offshore wind solicitation: the Empire Wind and Sunrise Wind development projects of Equinor US Holdings, Inc. and Bay State Wind LLC, a joint venture of Ørsted A/S and Eversource Energy, respectively.

Combined, both projects will total 1,700 megawatts, enough to power more than one million homes and support more than 1,600 jobs with a combined economy activity of $3.2 billion statewide. As of today, New York has awarded a total of approximately 4,700 megawatts of new large-scale renewable energy contracts since March 2018 through three separate solicitations, a globally significant advancement in renewable energy in just two years. Collectively, these projects will provide enough renewable energy to power up to two million households and meet nearly 10% of New York’s electricity needs by 2025.

According to the Governor’s office, the project developers have also committed to make additional investments in manufacturing and port infrastructure.

The New York State Energy Research and Development Authority (NYSERDA) will now negotiate contracts for the selected projects and says that they offered prices approximately 40% less than expected compared to analysis completed in early 2018. Following execution of the contracts, NYSERDA will release contract details, including price and other relevant metrics.

The 816-megawatt Empire Wind project by Equinor channels the many unique capabilities of the Empire State. Supplying renewable power from the New York Bight to New York City, where demand is highest, this project proposal is expected to yield more than 800 local jobs and a foothold gravity-based foundation fabrication facility at the Port of Coeymans that will supply this and future regional offshore wind projects. The project is expected to bring significant and long-term New York State jobs and economic benefits, including using South Brooklyn as its operations and maintenance base, providing consistent high-quality jobs to the community located near the project’s proposed interconnection point at Con Edison’s Gowanus substation. Port upgrades and sourcing of key components are expected to commence as early as spring 2021. The construction of the Empire Wind project is anticipated to begin in 2022 and the project is scheduled to enter commercial operation in December of 2024.

Christer Geijerstam, President, Equinor Wind US, said, “Honestly, Governor Cuomo’s offshore wind announcement feels like a dream come true. Since we won our lease area three years ago, we’ve focused on one challenge: what’s the best possible project we can build for New Yorkers. Now, we have the unique chance to use our offshore experience and expertise to create a powerful and profitable new industry together with the state of New York, local communities and U.S. industry.”

The 880-megawatt Sunrise Wind project is a strategic partnership of global offshore wind leader Ørsted and Eversource Energy and is supported by Con Edison Transmission and the New York Power Authority, who will support the development of the project’s transmission facilities. The Sunrise Wind project proposal commits to leverage Ørsted’s and Eversource’s strong presence in the northeast to co-locate its North American Operations Headquarters and a regional operations and maintenance hub in Port Jefferson, Long Island, which will be capable of supporting the Sunrise Wind project and affiliated U.S. projects. The Sunrise Wind project is expected to support over 800 local jobs, leverage the Capital Region’s port facilities to support steel component fabrication for the turbine foundations, and provide financial and technical support for a number of regional institutions and entities to support research and education and help advance responsible development of offshore wind energy. The project’s planned interconnection point is the Holbrook and West-Bus substations in the town of Brookhaven within the Long Island Power Authority’s (LIPA) service territory. The Sunrise Wind project is expected to start construction in 2022 and will commence commercial operation in May of 2024.

Thomas Brostrøm, President of Ørsted North America and CEO of Ørsted U.S. Offshore Wind said, “We are thrilled that the Sunrise Wind project has been selected in New York’s inaugural offshore wind solicitation, and we want to thank Governor Cuomo’s administration and NYSERDA for the thorough and thoughtful evaluation of our proposal. At Ørsted, we believe that it’s time to take real action to create a world that runs on green energy and we need to act now to reduce the effects of climate change. Governor Cuomo’s energy agenda and ambitious commitment to offshore wind is the best example of how New York shares those values.”

Lee Olivier, Executive Vice President of Enterprise Energy Strategy at Eversource said, “We believe that Sunrise Wind has the best site and is the best team to deliver results for New York, which is critical as Governor Cuomo sets a national precedent with the goal of creating 9,000 megawatts of offshore wind capacity for New York by 2035. The Sunrise Wind project’s promise is to supply clean energy to thousands of homes, garner economic development and investment for the state’s economy, and create hundreds of permanent full-time jobs. Under the leadership of Governor Cuomo, New York is leading the way to grow the offshore wind industry and combat climate change, and we’re excited be a part of that future.”