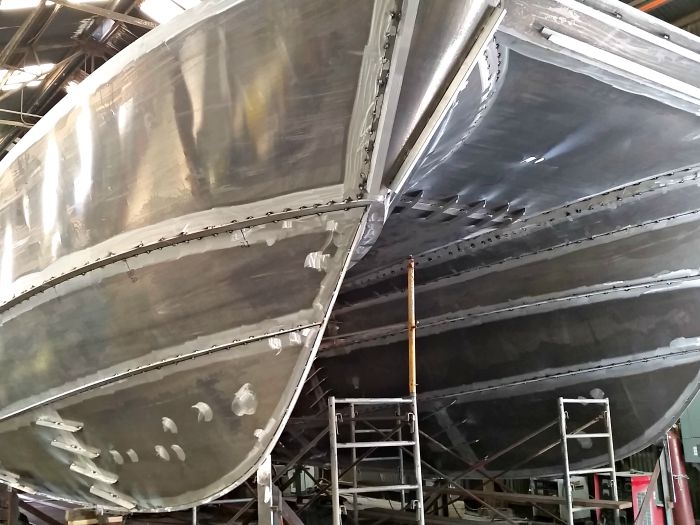 AUGUST 12, 2015—An official ribbon-cutting ceremony will be held today at the Warren, RI, shipyard of Blount Boats, Inc., for the first offshore wind farm crew transfer vessel being built in the U.S.

As we reported earlier, the 21m crew transfer vessel, based on a design by South Boats IOW, will service the new five-turbine Deepwater Block Island Wind Farm. With the first two jacket foundations for the Block Island project already in the water and on site, preparations for the construction phase of the first U.S. offshore wind farm are well underway. Yet, while Deepwater’s project will provide much-needed impetus for the development of a North American offshore wind supply chain, it is crucial that the offshore wind farm development is recognized as the first of many more projects to come.

As such, this Ribbon Cutting ceremony also serves as a catalyst for other U.S. supply chain businesses in Rhode Island to look at the ways in which they can become involved in the fledgling US offshore wind industry, and demonstrate the opportunities created by the market.

According to a Navigant report, the U.S. offshore wind industry could be worth up to $2.2 billion by 2020, with half of this value spread along the Atlantic coast.  In order to fulfill this growth potential, however, the entire market will require greater clarity from the federal government regarding its future offshore wind development intentions.

“Today’s event is a timely reminder that, providing the U.S. offshore wind industry is given the right support, we could be on the cusp of a significant domestic investment, manufacturing and employment success story,” says Charles A. Donadio Jr, President, Atlantic Wind Transfers.

Donadio adds, “With only the Block Island project currently confirmed, we’ve already seen a number of supply agreements signed with local firms—ranging from vessel construction, and its associated supply chain, to foundation structures.  Building a strong domestic U.S. supply chain increases the chances of being able to secure economic benefits in conjunction with a low carbon energy supply. But unless this initial momentum is maintained and supported by federal policy, we won’t see these wider benefits for many years to come.”

Blount Boats President Marcia Blount, says, “Today’s event in an opportunity for the emerging U.S. offshore wind industry to see up close another key element of the construction process—that is, the means by which to transfer engineers and technicians to site.  By building this vessel for Atlantic Wind Transfers, Blount Boats will alone secure employment for 70 Rhode Island workers.”

Says Senator Reed added, “It’s encouraging to see firsthand the economic momentum that renewable energy projects like this are helping to generate.  As our nation reduces its independence on fossil fuels, Block Island is demonstrating the tangible benefits of the emerging offshore wind industry and setting a benchmark.  By working together, we can build a local green energy industry here in Rhode Island that protects our environment, reduces long-term energy costs, and helps local businesses create sustainable jobs.”

Atlantic Wind Transfers’ first aluminum catamaran vessel will be launched in April 2016 for early sea trials. It will be active and fully operational on the Block Island project beginning on May 1, 2016