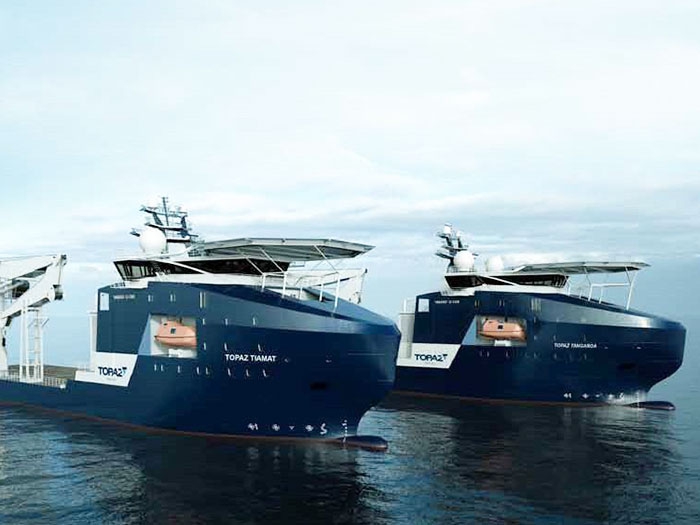 JANUARY 7, 2019 — Dubai, UAE, based Topaz Energy and Marine has signed a contract that, it says underlines the growing significance of offshore wind projects to the company.

Booked last month, the charter adds to Topaz’s revenue backlog, which as of September 30, 2018 stood at $1.4 billion.

The charter contract will take effect from February 2019 for a firm duration of seven months, with options to extend to late 2020. The agreement reflects market terms.

The Topaz Tangaroa, which was ordered in 2015 as part of an ongoing fleet renewal and reinvestment strategy by Topaz, is a 1,000 sq.m, diesel-electric light subsea construction vessel with 82 pax accommodation in comfort class 3, equipped with an AHC 120-tonne subsea construction crane. The vessel is built to the highest North Sea standards, with world-class station keeping and fuel economics.The Topaz Tangaroa and its sister vessel, the Topaz Tiamat, were both designed and built by Vard..

Rene Kofod-Olsen, CEO of Topaz Energy and Marine said: “Having recently signed the Topaz Tangaroa’s sister vessel – the Topaz Tiamat – on a long-term contract to Reach Subsea of Norway, it is particularly rewarding that both vessels are leaving the shipyard to go straight onto significant contracts with strong counterparties. The contracts reflect the trends we are seeing with both general subsea operators and offshore wind project owners becoming increasingly selective and demanding innovative, safer and more efficient vessels.

“This significant contract is a testament to Topaz’s strategic, counter cyclical investment into a growing subsea segment and our ability to deliver the prerequisite technology and safety capabilities our clients increasingly require. This approach has enabled us to forge new long-term partnerships with two new partners, and to strengthen our position in serving clients in both the oil & gas and renewable energy sectors.”