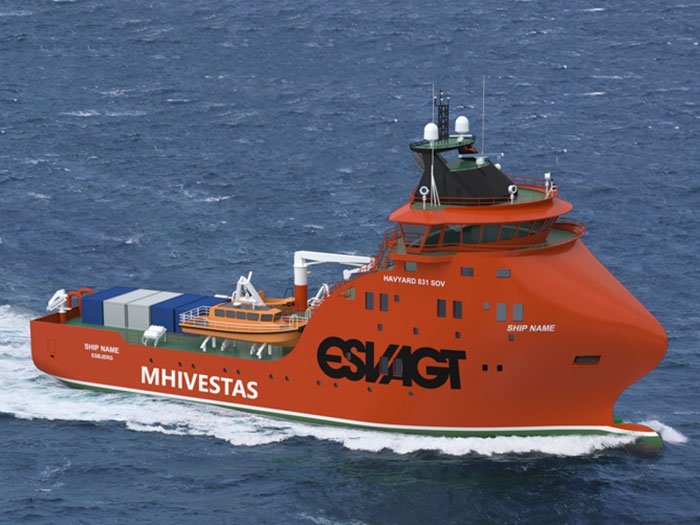 ESVAGT has won a 15-year contract for the vessel which, it says is not only its longest thus far, but also the largest in terms of value.

“This contract builds on the strong relationship we have had with MHI Vestas since 2010. We are very pleased with the trust MHI Vestas is showing in us by signing a deal of this magnitude,” says Chief Executive Officer Søren Nørgaard Thomsen, ESVAGT A/S.

The SOV will be equipped with a walk-to-work gangway system in a custom designed tower with a crane placed on top of the tower, which, together with ESVAGT’s unique Safe Transfer Boats STB 7 and STB 12, will contribute to the safe transfer of turbine technicians, tools and spare parts.

The ship will be built at the Zamakona Shipyard in Bilbao, Spain.

It is being built to Havyard 831 SOV design under a NOK 70 million design and equipment order with Norway’s Havyard Group that includes a DE propulsion system from Norwegian Electric Systems AS in which Havyard has a stake of just over 50%, as well as a Havyard Integrated Automation System and a Havyard Concept Bridge].

“We have developed a vessel that has met requirements from both shipowner and operator of the vessel,” says Havyard Design & Solution Sales Director Gisle Vinjevoll Thrane. “We have balanced technical aspects with commercial requirements, and as such, we have been able to win this contract in a tough and competitive market.”