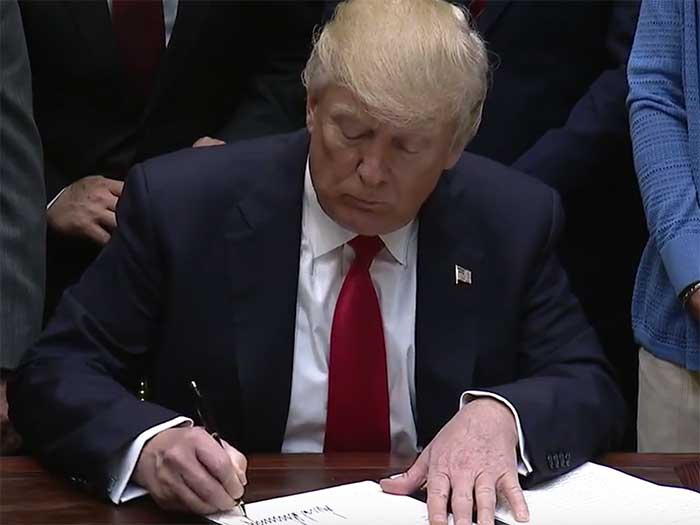 APRIL 28, 2017 — Setting the stage for many likely legal challenges, President Donald J. Trump today issued an Executive Order aimed at implementing an America-first offshore energy strategy. As well as opening up many areas for offshore drilling, it appears to open the way for a possible roll back of a number of safety requirements brought in following the Deepwater Horizon incident.

In remarks at the signing ceremony, President Trump said:

“This is a great day for American workers and families, and today we’re unleashing American energy and clearing the way for thousands and thousands of high-paying American energy jobs. Our country is blessed with incredible natural resources, including abundant offshore oil and natural gas reserves. But the federal government has kept 94 percent of these offshore areas closed for exploration and production. And when they say closed, they mean closed.

“This deprives our country of potentially thousands and thousands of jobs and billions of dollars in wealth. I pledged to take action, and today I am keeping that promise.

“Finally, this order will enable better scientific study of our offshore resources and research that has blocked everything from happening for far too long. You notice it doesn’t get blocked for other nations. It only gets blocked for our nation.

“Renewed offshore energy production will reduce the cost of energy, create countless good jobs, and make America more secure and far more energy independent. This action is another historic step toward future development and future — with a future — a real future. And I have to say that’s a real future with greater prosperity and security for all Americans, which is what we want.”

Following is the text of the Executive Order

By the authority vested in me as President by the Constitution and the laws of the United States of America, including the Outer Continental Shelf Lands Act, 43 U.S.C. 1331 et seq., and in order to maintain global leadership in energy innovation, exploration, and production, it is hereby ordered as follows:

Section 1. Findings. America must put the energy needs of American families and businesses first and continue implementing a plan that ensures energy security and economic vitality for decades to come. The energy and minerals produced from lands and waters under Federal management are important to a vibrant economy and to our national security. Increased domestic energy production on Federal lands and waters strengthens the Nation’s security and reduces reliance on imported energy. Moreover, low energy prices, driven by an increased American energy supply, will benefit American families and help reinvigorate American manufacturing and job growth. Finally, because the Department of Defense is one of the largest consumers of energy in the United States, domestic energy production also improves our Nation’s military readiness.

Sec. 2. Policy. It shall be the policy of the United States to encourage energy exploration and production, including on the Outer Continental Shelf, in order to maintain the Nation’s position as a global energy leader and foster energy security and resilience for the benefit of the American people, while ensuring that any such activity is safe and environmentally responsible.

Sec. 3. Implementing an America-First Offshore Energy Strategy. To carry out the policy set forth in section 2 of this order, the Secretary of the Interior shall:

(a) as appropriate and consistent with applicable law, including the procedures set forth in section 1344 of title 43, United States Code, in consultation with the Secretary of Defense, give full consideration to revising the schedule of proposed oil and gas lease sales, as described in that section, so that it includes, but is not limited to, annual lease sales, to the maximum extent permitted by law, in each of the following Outer Continental Shelf Planning Areas, as designated by the Bureau of Ocean Energy Management (BOEM) (Planning Areas): Western Gulf of Mexico, Central Gulf of Mexico, Chukchi Sea, Beaufort Sea, Cook Inlet, Mid-Atlantic, and South Atlantic;

(b) ensure that any revisions made pursuant to subsection (a) of this section do not hinder or affect ongoing lease sales currently scheduled as part of the 2017-2022 Outer Continental Shelf Oil and Gas Leasing Proposed Final Program, as published on November 18, 2016; and

(c) develop and implement, in coordination with the Secretary of Commerce and to the maximum extent permitted by law, a streamlined permitting approach for privately funded seismic data research and collection aimed at expeditiously determining the offshore energy resource potential of the United States within the Planning Areas.

Sec. 4. Responsible Planning for Future Offshore Energy Potential. (a) The Secretary of Commerce shall, unless expressly required otherwise, refrain from designating or expanding any National Marine Sanctuary under the National Marine Sanctuaries Act, 16 U.S.C. 1431 et seq., unless the sanctuary designation or expansion proposal includes a timely, full accounting from the Department of the Interior of any energy or mineral resource potential within the designated area including offshore energy from wind, oil, natural gas, methane hydrates, and any other sources that the Secretary of Commerce deems appropriate and the potential impact the proposed designation or expansion will have on the development of those resources. The Secretary of the Interior shall provide any such accounting within 60 days of receiving a notification of intent to propose any such National Marine Sanctuary designation or expansion from the Secretary of Commerce.

(i) The review under this subsection shall
include:

(B) an analysis of the adequacy of any required Federal, State, and tribal consultations conducted before the designations or expansions; and

(C) the opportunity costs associated with potential energy and mineral exploration and production from the Outer Continental Shelf, in addition to any impacts on production in the adjacent region.

(ii) Within 180 days of the date of this order, the Secretary of Commerce, in consultation with the Secretary of Defense and the Secretary of the Interior, shall report the results of the review under this subsection to the Director of the Office of Management and Budget, the Chairman of the Council on Environmental Quality, and the Assistant to the President for Economic Policy.

“Under the authority vested in me as President of the United States, including section 12(a) of the Outer Continental Shelf Lands Act, 43 U.S.C. 1341(a), I hereby withdraw from disposition by leasing, for a time period without specific expiration, those areas of the Outer Continental Shelf designated as of July 14, 2008, as Marine Sanctuaries under the Marine Protection, Research, and Sanctuaries Act of 1972, 16 U.S.C. 1431-1434, 33 U.S.C. 1401 et seq.”

Nothing in the withdrawal under this section affects any rights under existing leases in the affected areas.

Sec. 6. Reconsideration of Notice to Lessees and Financial Assurance Regulatory Review. The Secretary of the Interior shall direct the Director of BOEM to take all necessary steps consistent with law to review BOEM’s Notice to Lessees No. 2016 N01 of September 12, 2016 (Notice to Lessees and Operators of Federal Oil and Gas, and Sulfur Leases, and Holders of Pipeline Right-of-Way and Right-of-Use and Easement Grants in the Outer Continental Shelf), and determine whether modifications are necessary, and if so, to what extent, to ensure operator compliance with lease terms while minimizing unnecessary regulatory burdens. The Secretary of the Interior shall also review BOEM’s financial assurance regulatory policy to determine the extent to which additional regulation is necessary.

Sec. 8. Reconsideration of Proposed Offshore Air Rule. The Secretary of the Interior shall take all steps necessary to review BOEM’s Proposed Rule entitled “Air Quality Control, Reporting, and Compliance,” 81 Fed. Reg. 19718 (April 5, 2016), along with any related rules and guidance, and, if appropriate, shall, as soon as practicable and consistent with law, consider whether the proposed rule, and any related rules and guidance, should be revised or withdrawn.

Sec. 10. Review of National Oceanic and Atmospheric Administration (NOAA) Technical Memorandum NMFS-OPR-55. The Secretary of Commerce shall review NOAA’s Technical Memorandum NMFS-OPR-55 of July 2016 (Technical Guidance for Assessing the Effects of Anthropogenic Sound on Marine Mammal Hearing) for consistency with the policy set forth in section 2 of this order and, after consultation with the appropriate Federal agencies, take all steps permitted by law to rescind or revise that guidance, if appropriate.

Sec. 11. Review of Offshore Arctic Drilling Rule. The Secretary of the Interior shall immediately take all steps necessary to review the Final Rule entitled “Oil and Gas and Sulfur Operations on the Outer Continental Shelf—Requirements for Exploratory Drilling on the Arctic Outer Continental Shelf,” 81 Fed. Reg. 46478 (July 15, 2016), and, if appropriate, shall, as soon as practicable and consistent with law, publish for notice and comment a proposed rule suspending, revising, or rescinding this rule.

Sec. 12. Definition. As used in this order, “Outer Continental Shelf Planning Areas, as designated by the Bureau of Ocean Energy Management” means those areas delineated in the diagrams on pages S-5 and S-8 of the 2017-2022 Outer Continental Shelf Oil and Gas Leasing Draft Proposed Program, as published by the BOEM in January 2015, with the exception of any buffer zones included in such planning documents.

Sec. 13. General Provisions. (a) Nothing in this order shall be construed to impair or otherwise affect:

(i) the authority granted by law to an executive department or agency, or the head thereof; or

(ii) the functions of the Director of the Office of Management and Budget relating to budgetary, administrative, or legislative proposals.

(b) This order shall be implemented consistent with applicable law and subject to the availability of appropriations.

(c) This order is not intended to, and does not, create any right or benefit, substantive or procedural, enforceable at law or in equity by any party against the United States, its departments, agencies, or entities, its officers, employees, or agents, or any other person.