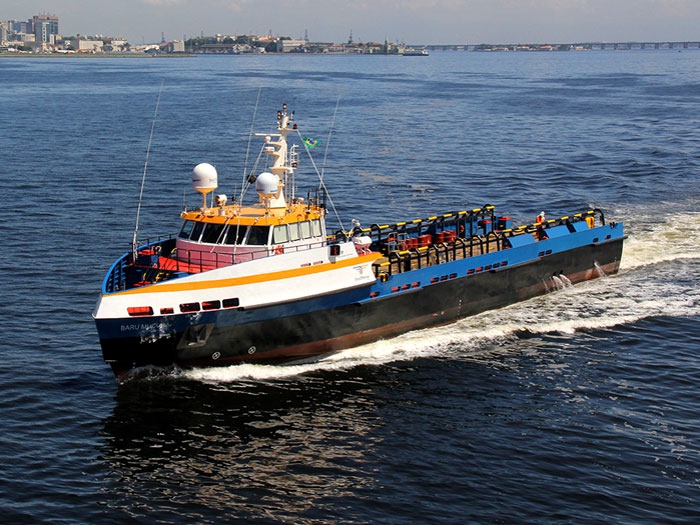 MARCH 8, 2017—The final six in a series of twelve 48m DP-1 monohull Fast Supply Vessels (FSVs) were recently delivered by Brazilian shipyard ETP Engenharia for operation in Brazil, according to the vessels’ designer Australia’s Incat Crowther.

The six FSVs are all Brazil flagged and classed by DNV GL as +1A1 HSLC(bra) R1 Service E0.

The vessels are equipped with an expansive aft cargo deck of 225 m2 of usable area rated for 3 tons per square meter and a total capacity of 250 tons of deck cargo.

An additional 30 m2 of cargo area is provided inside the main deck cabin, allowing for carriage of items out of the elements, such as food, medical supplies, small tools and similar type cargoes. This space has the ability to be reconfigured for the carriage of 60 offshore personnel. Also housed in the main deck cabin are wet room and laundry facilities.

Six cabins accommodating 11 crew, as well as a mess, galley and bathrooms are provided below deck of each vessel.

Each of the vessels is powered by four Cummins QSK 50 main engines, each rated at 1,800 hp at 1,900 rev/min. Propulsion is by way of fixed-pitched propellers, while two 150 hp electric tunnel bow thrusters enhance maneuverability for the DP classed vessels. The vessels have a service speed of 21 knots.