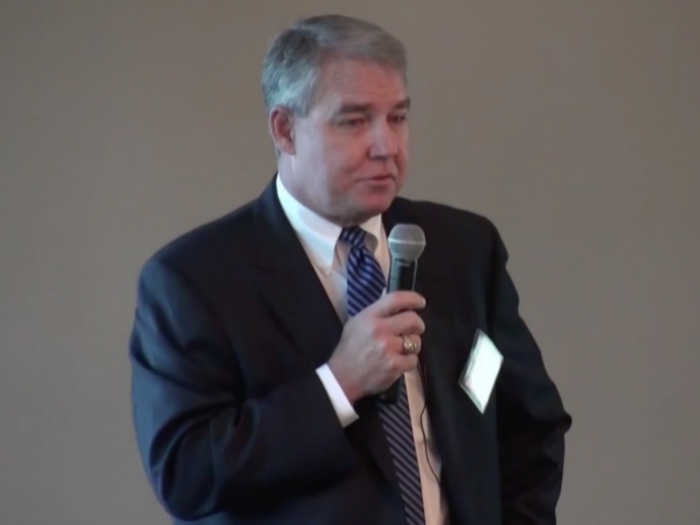 John Rynd, shown at a 2011 Bauer alumni breakfast, was recently appointed the new President and CEO of Tidewater

FEBRUARY 16, 2018 — Publicly traded Tidewater Inc. (NYSE: TDW) announced it has appointed former Hercules Offshore executive John T. Rynd as the company’s new President and Chief Executive Officer and a member of the Board of Directors effective March 5.  Rynd will replace Larry T. Rigdon, who has served as interim President and Chief Executive Officer since October 2017.

Tom Bates, Chairman of the Board of Directors, said “After completing a comprehensive search, the Board is very pleased to welcome John to the team. He brings with him considerable experience in the offshore drilling services sector and the global oil and gas industry as a whole. John’s experience, leadership and vision will be tremendous assets to Tidewater as we work to continue to strengthen the company’s position in this challenging market.”

Rynd previously served as Chief Executive Officer and President, and as a director of Hercules Offshore from 2008 through 2016. Prior to his time with Hercules, Rynd spent 11 years with Noble Drilling Services, Inc., where he served in a variety of management roles. Earlier in his career, he served in various roles of increasing levels of responsibility with Chiles Offshore and Rowan Companies.

Rynd said, “I’m honored and excited to be joining the Tidewater team. The company has a strong foundation with its talented people, a long history of providing safe and reliable services to our customers worldwide and one of the strongest balance sheets in the offshore industry. I look forward to working with the Tidewater team to leverage these strengths to build value for our employees, customers and shareholders, as the market improves in the years ahead.”

“On behalf of all Tidewater stakeholders, I would like to thank Larry for his leadership of the business during this interim period, implementing significant progress towards achieving the company’s near term objective of reaching breakeven cash flow. I look forward to his continued service on the Tidewater Board,” said Bates.

Tidewater owns and operates one of the largest fleets of Offshore Support Vessels in the industry, with over 60 years of experience supporting offshore energy exploration and production activities worldwide.