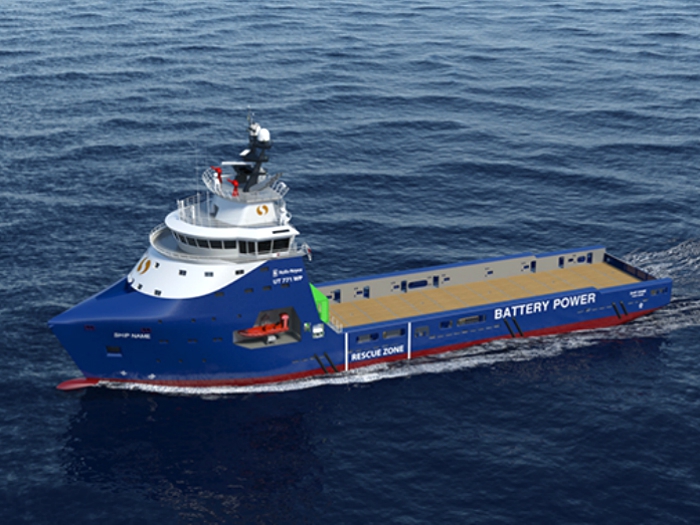 Under the contract, Rolls-Royce will deliver Energy Storage Container Systems (ESSUs); upgrade of the existing Rolls-Royce ship design engineering packages to match the new features; upgrade the Dynamic Positioning systems (DP) and the ACON control systems; and supply new Rolls-Royce Energy Monitoring systems, which will provide a complete overview of energy usage onboard.

Recently SEACOR Marine Holding announced that they have entered a joint venture with China Cosco Shipping Group. The new venture, SEACOSCO, has taken over eight PSVs, which are currently laid up at the shipyard.

The ships were ordered in 2013 and 2014 and their new owners have now decided to give six of the Rolls-Royce designed vessels an environmental upgrade, with an option for a further two. The ambition is to get them to work as fast as possible.

SEACOR, which has its head office in Louisiana, will take full operational responsibility for the vessels and add them to their current fleet.

In a press release from the company earlier this month, John Gellert, President, Chief Executive Officer and Director, SEACOR, said: “Combining a proven and advanced design, best in category accommodations, and the innovative Rolls-Royce battery system, these vessels will be highly marketable across all major offshore energy regions worldwide.”

Asbjørn Skaro, Director Digital & Systems – Commercial Marine, Rolls-Royce, said, “These are advanced and modern ships, and we strongly believe that the new energy system onboard will make them stand out from the crowd in the market. They will receive an upgrade that benefits both the environment and the economic efficiency of the ships.”

The vessels are of Rolls-Royce UT 771 WP design, and have the characteristic Wave Piercing bow. The bow reduces wave resistance during rough conditions, resulting in a smoother ride than traditional designs, reduced fuel consumption and increased onboard safety.

In addition to having provided the ship design, Rolls-Royce also originally delivered an extensive package of ship equipment and systems to the vessels now being prepared for an environmental upgrade. This new order for six offshore vessels – with an option for further two – follows deliveries or orders for battery systems for seven other vessels.