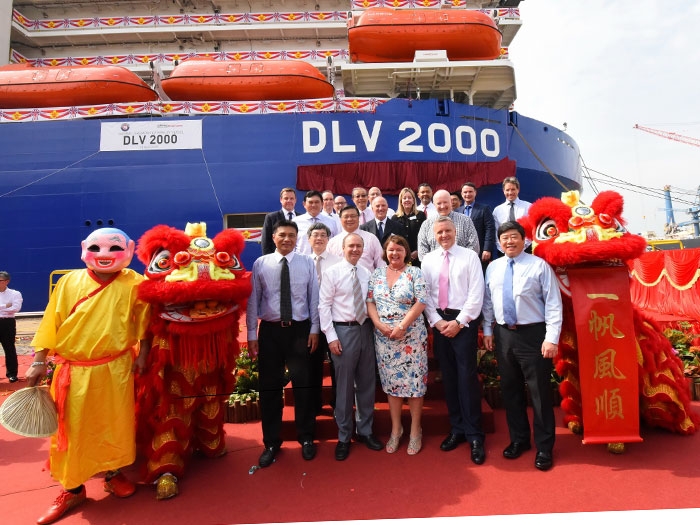 Leaders from McDermott International and shipbuilder Keppel are joined by the vessel's lady sponsor and celebrants during the naming ceremony of the DLV 2000, a high-specification deepwater derrick lay vessel at the Keppel Singmarine Shipyard

Mrs. Brenda Cuthbertson, wife of 38-year McDermott employee and Asia Area Vice President Hugh Cuthbertson, serves as the vessel’sgodmother and named the DLV 2000 with the traditional breaking of champagne during the ceremony.

The DLV 2000 is a class 3 dynamically positioned vessel combining a 2,200-ton revolving crane with a deepwater under deck S-lay pipelay system configured to install pipelines with diameters ranging from 4.5 to 60 inches in water depths up to 10,000 feet. The vessel can accommodate up to 400 personnel to facilitate large hook-up and commissioning projects, has a fast transit speed and incorporates a large, 43,000 square foot open deck to allow the transportation and assembly of large subsea structures; enabling safe and efficient stand-alone operations in remote areas.

“The DLV 2000 will add high-end capabilities and increased versatility to McDermott’s global fleet by utilizing a single vessel on projects requiring a combination of pipelay and heavy lift with appropriate deck space for structures and offshore workforce accommodation that would normally require multiple vessels; therefore, enabling a more efficient operation for our customers and a larger market access for McDermott,” said David Dickson, McDermott’s President and Chief Executive Officer.

“Through the long established relationship between Keppel and McDermott, the DLV 2000 has been built to a world class specification and on budget,” Mr. Dickson said. “The vessel represents a strategic component of McDermott’s long-term plan to deliver the best in class projects to our global customer base.”

The DLV 2000’s first assignment is scheduled offshore Western Australia on the INPEX Ichthys LNG Project. The DLV 2000 is expected to join the project in May 2016 for several months as part of McDermott’s work program by providing heavy construction support for the subsea system.

Work is scheduled to be performed in conjunction with McDermott’s other new subsea installation vessel, the Construction Support Vessel 108 (CSV 108), which is working successfully on the project. The CSV 108 is expected to undergo an upgrade later in 2016 to install a Vertical Lay System and Reel Deployment System for use on the project and will then be referred to as the Lay Vessel 108 (LV 108).

Additionally, the DLV 2000 is scheduled to support the transportation and installation contract awarded by Woodside Energy Limited for the Greater Western Flank Phase 2 subsea pipeline and installation project in Western Australia.