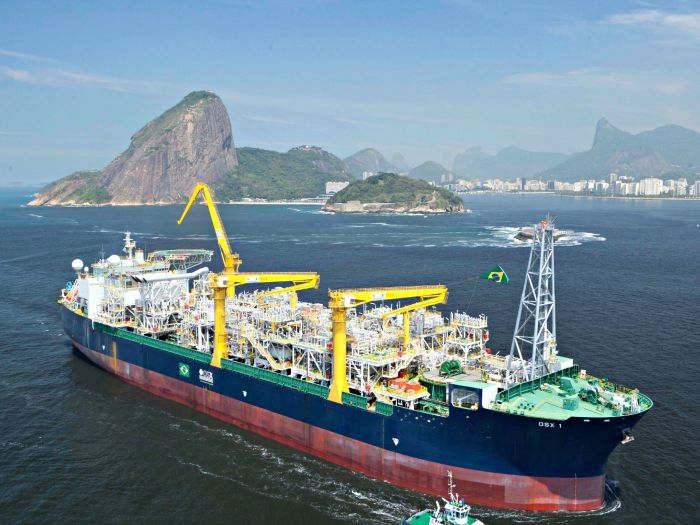 The FPSO OSX-1 built for operation in Brazil

AUGUST 10, 2015—South Korean shipyards are market leaders for construction of floating and fixed offshore oil and gas installations. They are world-class competitively, but even greater savings could result from addressing variations in owner, operator and regulatory requirements during engineering and construction for such projects.

Operators address this through onsite teams of up to 300 people, and sometimes move units from Asian yards for final completion closer to the final destination or offshore.

DNV GL has initiated a JIP to establish a new international industry standard for offshore oil and gas projects.

The JIP is based on discussions between Hyundai Heavy Industries (HHI) and DNV GL. It is now being discussed with operators and other Korean fabricators, such as Samsung Heavy Industries (SHI) and Daewoo Shipbuilding and Marine Engineering Company (DSME), and with the Korea Offshore and Shipbuilding Association and the Korea Marine Equipment Research Institute.

“We hope that it will lead to standardization that helps to reduce design periods and minimize design changes,” said JongBong Park, Senior Executive Vice President and COO of HHI’s Offshore and Engineering Division. “Other potential benefits include reduced material costs resulting from decreased expenses for material purchase, manufacturing and testing. A shortening of materials purchasing lead-time would be expected as more could be held in stock. Surplus materials could be used in other construction projects.”

“The complexity and range of standards, regulations and requirements create a big challenge for contractors,” observed Dr. Younsang Won, Senior Executive Vice President and Head of Offshore Production Operations, SHI, and Chairman of DNV GL’s Korea Technical Committee. “It takes much effort to clarify and implement these requirements, and there are sometimes omissions, inconsistencies and misinterpretations. This can generate a lot of changes and revisions, even when the design has already been frozen and fabrication/installation has started.”

One example of cost reduction through standardization comes from Norway, where DNV GL has studied savings from applying maritime rules from classification societies and maritime flag authorities—where possible—to offshore projects.

This “maritime approach,” accepted for certain floating offshore units in Norway, has allowed hulls and/or marine systems to be classified under a maritime/classification regime rather than the country’s Petroleum Safety Authority regulations. Maritime Class rules exist for many types of floating units. Shelfstate legislation will normally accept use of a flag/Class approach to areas of maritime character.

“Designers, yards and suppliers work more efficiently when projects apply standards with which all players are experienced,” explains Ellingsen. “Our ambition is to establish a standard for oil and gas projects that builds on the well-established approaches of, and experiences with, classification. Industry estimates for potential cost savings on construction of installations range well into double-figure percentages.”

“Standardization through a maritime approach is welcomed, but should be approached with caution,” he advised. “Individual operators and companies have varying regulations and specifications, as well as operation philosophies, and these may not be fully satisfied through maritime standards.”

The risk is that a common standard developed on the basis of harsh environments, such as the North Sea, could end up raising the requirements for “more benign” seas, he added. “We must also account for local content regulation in various regions.”

That said, he hoped that the JIP will provide the initiative for the standardization movement in the offshore industry.

One fabrication yard that consulted DNV GL experts expects cost savings of 30% to 50% from offshore projects equipment being ordered to maritime rather than offshore specifications.

The ‘maritime approach’ model to executing offshore projects has been successful in the North Sea, a challenging regulatory environment.

Brazil and Africa are less challenging in this regard. Therefore, they are even more suitable—where possible—for taking this approach. In these cases, standardized ship solutions can be used.

It takes in-depth knowledge to predict how regulators will decide whether a system comes under maritime or offshore oil and gas rules. DNV GL’s experience of classification and independent third-party verification helps companies to understand and comply with regulations and to determine when a maritime approach may be possible and desirable.