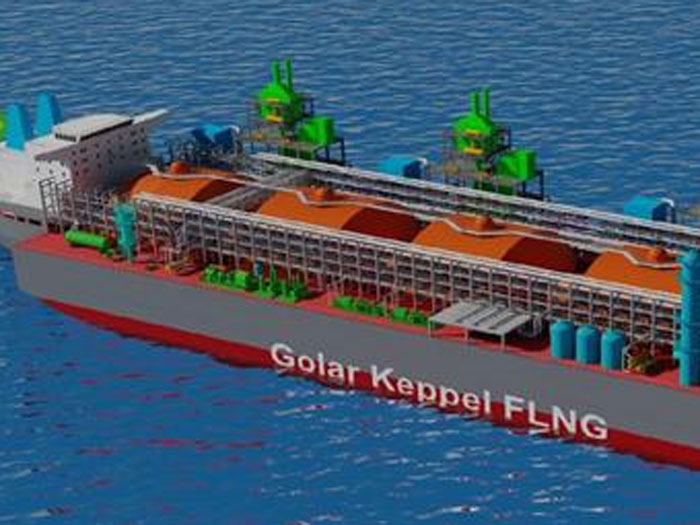 JULY 20, 2015—Golar LNG Limited reports that it has received an underwritten financing commitment for its first GoFLNG project, which involves the conversion of the Moss LNG carrier Hilli to a floating liquefaction vessel, for use in  Cameroon, at Singapore’s Keppel Shipyard.

The financing facility will be provided by CSSC (Hong Kong) Shipping Co. Ltd (CSSCL) in relation to a conversion financing and sale and leaseback transaction for the GoFLNG Hilli.

The financing structure will fund up to 80% of the project cost and will be split into two phases. The first phase enables Golar to draw down up to $700 million from the facility to fund the ongoing conversion cost, once Golar has spent $400 million of the estimated $1.2 billion conversion cost and a tolling contract with Perenco and SNH has been ratified by the Cameroon government, expected during Q3 2015.

Golar has spent about $385 million on the conversion to date and and expects that the threshold required to trigger the financing arrangement will be reached shortly.

The financing means that following the Cameroon government ratification, no further Golar direct funding for the Hilli conversion will be required, with the remainder of the conversion project being financed through this new debt facility.

The second phase is triggered upon the delivery of the converted GoFLNG Hilli from Keppel Shipyard and the satisfaction of certain additional performance milestones and will allow for the drawdown of up to a further $260 million giving an aggregate $960 million representing 80% of the project cost. The financing has a tenor of 10-years, a 15 year amortization profile and contemplates the eventual sale of GoFLNG Hilli to Golar LNG Partners.

The expected cost of the financing during the conversion period is 6.25%, while the long term financing is projected to cost less than 6% on a fully swapped ten year basis.