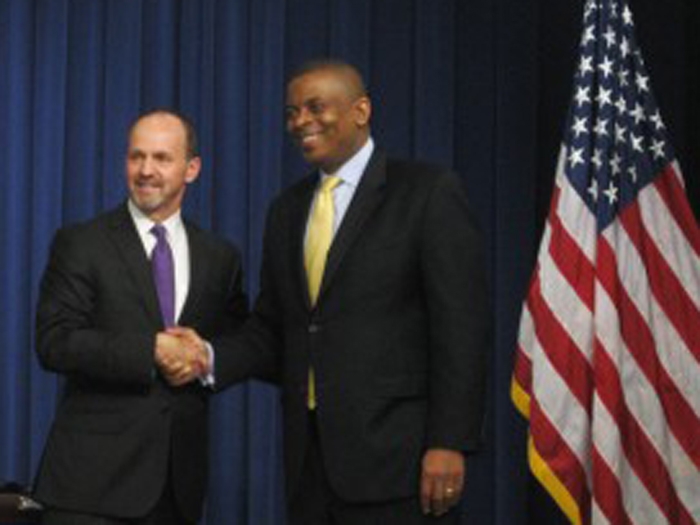 MAY 14, 2014 — TOTE, Inc. President & CEO Anthony Chiarello is among 11 individuals honored by the White House as 2014 transportation industry “Champions of Change.” Chiarello was chosen for his role in leading the U.S. maritime industry toward natural gas as fuel.

Mr. Chiarello joined fellow honorees and guests in the South auditorium of the White House yesterday to accept recognition and share insights during a panel discussion on “Opening Doors for Opportunity.”

TOTE is building the first natural gas-powered containerships in the world to serve Puerto Rico and is converting its ships in Alaska to natural gas; TOTE is the first vessel operator in the United States to convert its fleet to liquefied natural gas (LNG).

Mr. Chiarello, a fourth-generation member of the shipping and logistics industry, says the experience “has been both exciting and humbling.”

“As a Jones Act domestic carrier, we’re uniquely positioned to create real change in the supply conundrum – availability of fuel is a big hurdle for most transportation sectors to change over to clean-burning natural gas,” Mr. Chiarello wrote in a post he prepared for the White House Champions of Change blog. “Our regular service routes create enough of a steady demand to entice fuel partners to build liquefaction plants in our ports of call, thus making LNG supply available to others in those markets. Supply in Jacksonville, Florida and Tacoma, Washington will serve the Southeast and Pacific Northwest with natural gas that can be used for ships, trucks, and rail.”

TOTE announced plans to convert its fleet to natural gas in 2012. Since then, natural gas suppliers have begun creating distribution networks in major U.S. ports, making gas available to all transportation modes in those markets.

Natural gas-powered ships will achieve emissions reductions far below even the world’s most stringent regulatory standards. These emissions reductions will have long-lasting and far-reaching positive effects on the health and safety of citizens along the U.S. coastline – particularly in Washington, Alaska, Florida, and Puerto Rico, where TOTE ships are part of the critical domestic supply chain. As the adoption of natural gas fuel spreads, air emissions will be lowered along the coastline as part of the North American Emissions Control Area, and additional environmental benefits will accrue in ports, and on roads and rail lines.

“It is an honor to stand among the 2014 Transportation Champions of Change representing TOTE and [parent company] Saltchuk,” Mr. Chiarello continued. “My colleagues and I are proud of our investments into new technology as a reflection of our commitment to the people and customers of Alaska and Puerto Rico. We’re equally pleased to help move the U.S. toward natural gas as a marine transportation fuel while providing the most advanced, safe, reliable service possible.”