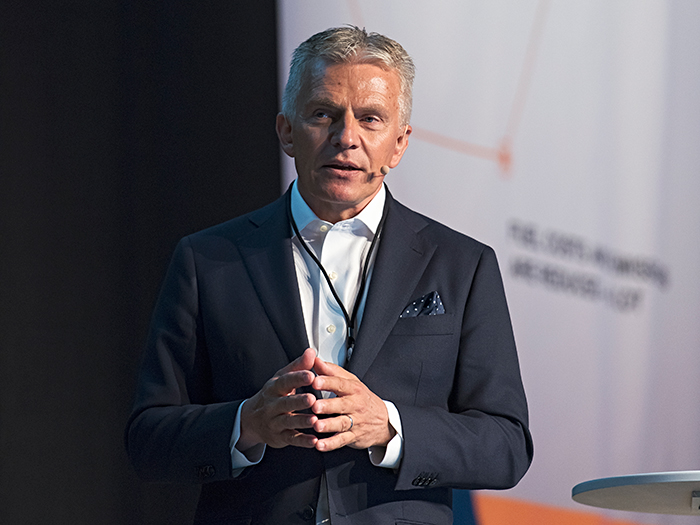 Wärtsilä Corporation President and CEO Jaakko Eskola says that though adjustments to the company’s cost base are “essential,” it must also secure its ability to capture future growth opportunities, with reorganization of its Marine Business into three independent businesses being central to this.

In its just released financial results for January-March 2020, Wärtsilä Corporation reports that net sales are stable but that profitability is burdened by the coronavirus outbreak and the measures being taken to contain it.

Highlights for the period:

“Net sales increased slightly from the corresponding period last year, thanks to growth in both equipment deliveries and service activity in the Marine Business,” said Eskola. “Energy equipment deliveries, on the other hand, declined largely due to project timing and some COVID-19 related delays.”

Eskola described demand in the first quarter as “reasonable considering the prevailing market conditions.” He said a decline in marine order intake was largely due to alack of scrubber investments, as fuel spreads had narrowed.

“The cruise segment in particular has been severely affected by the actions taken to contain the virus spread,” he said, “while several energy project sites have been demobilized. The risk of weakening economic activity has caused shipowners and operators to re-evaluate their investment plans. Similarly, in the energy markets, deteriorating macroeconomic conditions and the anticipated decrease in electricity consumption are resulting in postponed investment decisions for new power generation capacity.”

Eskola said that Wärtsilä has taken proactive steps to lower its cost base by approximately EUR 100 million by reducing working hours and initiating temporary layoffs, as well as by limiting the use of external personnel and consultants.

“While adjustments to our cost base are necessary, we must also secure our ability to capture future growth opportunities,” said Eskola. “In this context, the progression of our Marine Business reorganization into three independent businesses is central. It will allow us to accelerate strategy execution and simplify the business structure in order to increase the agility and speed of our decision-making. In addition, although we are reducing discretionary spending, we remain committed to investing in R&D projects that are critical to our long-term success. Among other initiatives, we are actively working on developing the use of alternative, commercially viable and environmentally friendly fuels to reduce greenhouse gas emissions in the shipping and energy sectors. I am therefore pleased to highlight both the advances we have recently made in testing the use of ammonia in our engines and fuel systems, as well as the funding we have received for the X-Ahead project. The aim of this project is to develop deep expertise in the technical and business potential of Power-to-X, which will be used to promote a carbon neutral economy. These initiatives are indicative of our commitment to enabling sustainable societies with smart technology.”

The three independent businesses into which Wärtsilä’s Marine Business is being reorganized consist of Marine Power, Marine Systems and Marine Voyage. They will be operational as of July 1, 2020.

Tamara de Gruyter (b. 1972, B.Sc. Shipbuilding Engineering) was appointed President of Marine Systems & Executive Vice President as of March 5, 2020. Prior to the appointment, De Gruyter held a key role in driving Wärtsilä’s transformation, in addition to heading the recently established Portfolio Business.

Sean Fernback (b. 1963, Dipl. Electronics Engineering) was appointed President of Marine Voyage & Executive Vice President as of May 4, 2020. He joins Wärtsilä from Navico, where he most recently held the position of Chief Technology Officer and was responsible for driving the company’s digital marine agenda.