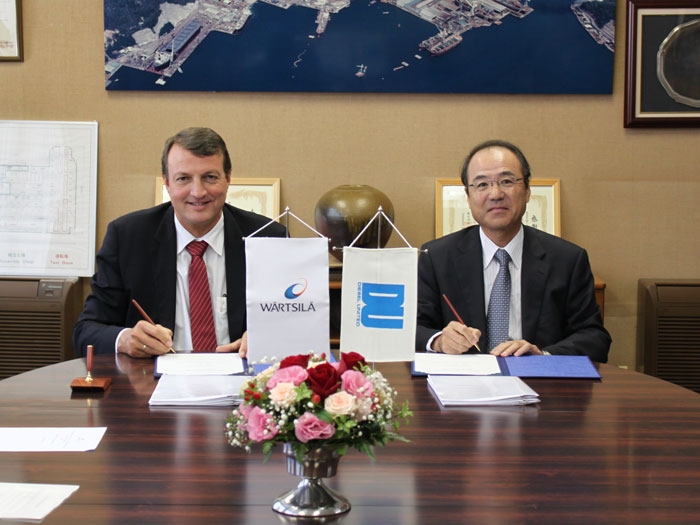 OCTOBER 31, 2014 — Wärtsilä and Japan’s Diesel United Ltd. have signed a ten-year renewal of their cooperation agreement for the sale, manufacturing and servicing of Wärtsilä low-speed marine engines.

Diesel United, which is part of the IHI Group is a long-standing member of the Wärtsilä family of low-speed engine licensees. The renewal was signed on the 66th anniversary of the signing of the license by Diesel United for Sulzer low-speed marine engines on October 4,1948. It has been Diesel United’s sole license for low-speed two-stroke diesel engines ever since.

The license cooperation agreement grants Diesel United the right to use Wärtsilä’s low-speed engine technology for manufacturing, sale and servicing of Wärtsilä low-speed engines in the Japanese market and some export countries. It also definines and regulates intellectual property rights, and the delivery and feedback of technical information and support. Such licence agreements allow synergies to the participating companies by aggregating research, development and design with the licensor while distributing and localizing manufacture to licensees in separate countries.

In addition to building many engines, Diesel United has, over the years, also contributed to the development of Wärtsilä low-speed engines and has also built the first examples of new engine types.

Wärtsilä will start testing at Aoi in the first quarter 2015 with the main focus being on performance optimization and component validation. Additionally, the test engine will serve as a technology demonstrator for the shipping industry.

From the first vessel equipped with a Harima-built Sulzer engine in 1950, the Kyoei Maru with a 6TD36 trunk-piston two-stroke engine, until today, more than 2,900 engines have been built under the cooperation, totaling more than 27,900 MW (38 million bhp).

“Wärtsilä and Diesel United have a long common history in introducing new technologies to the Japanese and international shipbuilding industry. The extension of our licence co-operation agreement for a period of ten years will enable us to strengthen our presence in the important Japanese shipbuilding market and to make sure that our customers will also in the years to come be able to benefit from the availability of competitive, high quality fuel efficient and environmentally friendly main propulsion engines for large merchant vessels built by Diesel United,” says Martin Wernli, Vice President, two-stroke, Wärtsilä Ship Power.