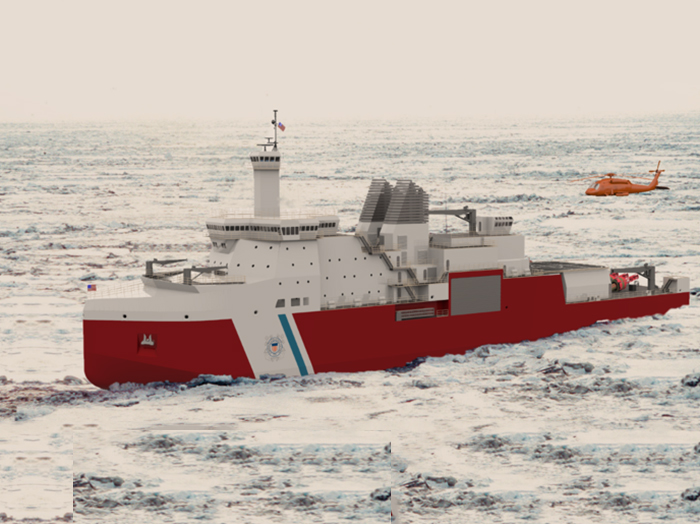 As we reported earlier, as prime contractor, VT Halter has been awarded a $745,940,860 fixed-price incentive-firm contract for the detail design and construction of the first PSC (formerly the Heavy Polar Icebreaker).

The PSC program is a multiple year Department of Homeland Security Level 1 investment and a USCG major system initiative to acquire up to three multi-mission PSCs to recapitalize the USCG’s fleet of heavy icebreakers. VT Halter Marine’s contract includes options which, if exercised, would bring the cumulative value of the contract to $1,942,812,266.

The ship design is an evolution from the mature Polar Stern II, currently in design and construction in Germany.  The team has worked rigorously to demonstrate its maturity and reliability. During the study, TAI incrementally adjusted the design and conducted a series of five ship model tank tests to optimize the design.

The vessels are 460 feet in length with a beam of 88 feet overall and a full load displacement of approximately 33,000 long tons at delivery.

The propulsion will be diesel electric at over 45,200 horse power and readily capable of breaking ice between six to eight feet thick.

The vessel will accommodate 186 personnel comfortably for an extended endurance of 90 days.

In addition to TAI, VT Halter Marine has teamed with ABB/Trident Marine for its Azipod propulsion system, Raytheon for command and control systems integration, Caterpillar for the main engines, Jamestown Metal Marine for joiner package, and Bronswerk for the HVAC system.

The program is scheduled to bring an additional 900 skilled craftsman and staff to the Mississippi shipyard.

“The talented workforce of the VT Halter Marine team is proud to be part of this important effort to strengthen U.S. capability in the polar regions. This contract award is also testimony of U.S.-shipbuilding capability along the Gulf Coast and the great support Mississippi provides to its industries,” said Ronald Baczkowski, Chief Executive Officer of VT Halter Marine.