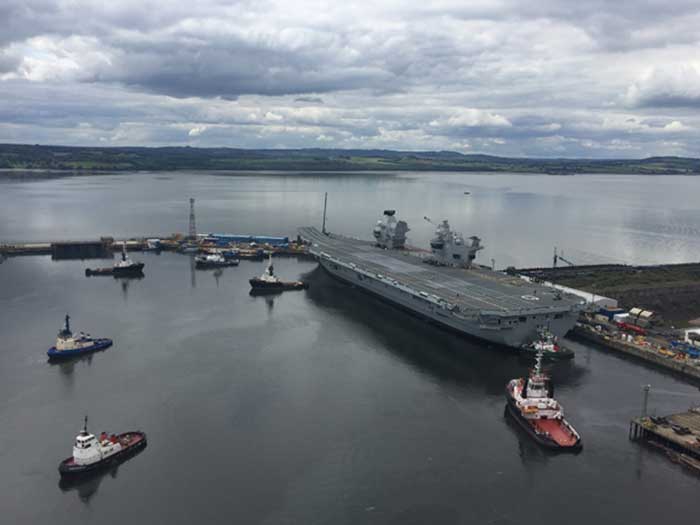 Maneuvering the carrier from the dock required eleven tugboats

Eleven tugs maneuvered the carrier out of the dock at Rosyth.
She then squeezed through the narrow entrance into the Forth estuary.

Three years after she was officially named by Her Majesty Queen Elizabeth II, the U.K’s future flagship will spend an initial period of around six weeks at sea to test the fundamentals of the ship. The sea trials will monitor speed, maneuverability, power and propulsion as well as undertaking weapons trials and additional tests on her levels of readiness.

Following this initial period, HMS Queen Elizabeth will return to Rosyth for further testing and maintenance before heading back to sea for a second stage which aims to test her Mission Systems. She will transit to her home port of Portsmouth Naval Base to be handed over to the Royal Navy later this year.

HMS Queen Elizabeth is the largest and most powerful warship ever constructed for the Royal Navy. The ship will operate with a crew of approximately 700, increasing to the full complement of 1,600 when aircraft are in operation. The ship’s company moved on board earlier this month. Working alongside industry colleagues, they have been familiarizing themselves with the new ship and the high tech systems on board as well as undergoing training.

HMS Queen Elizabeth’s sister ship, HMS Prince of Wales is structurally complete and is currently in the outfitting phase of her program. The Class will be the centerpiece of Britain’s maritime capability. Each aircraft carrier, coupled with the F-35B Lightning aircraft, will form an integral part of the UK’s Carrier Strike capability. The vessels will transform the UK’s ability to project power around the World, whether independently or working closely with our allies, on operations ranging from high intensity warfighting to providing humanitarian aid and disaster relief.

Each carrier displaces 65,000 tonnes
Each carrier is 280 mn length
Top speed is upwards of 25 knots
The carriers will have a crew complement of abou.700, increasing to about 1,600 when a full complement of 36 F-35B aircraft and four Crowsnest helicopters are embarked

Highly mechanized weapons handling system: At the push of a button pallets of munitions can be moved from the magazines deep in the weapons preparation area to the flight deck where they can be loaded onto aircraft

Storage: The location and design of the storage facilities enable 20 people to replenish the ship’s stores in half a day

Galley: Technologically advanced equipment and layout of the galley makes maintenance and service more efficient. The entire crew can be served meals in 90 minutes.

The Queen Elizabeth class ships, are being delivered by the Aircraft Carrier Alliance (ACA), a single integrated team formed of Babcock, BAE Systems, Thales UK and the MoD. Rolls-Royce is part of the Power & Propulsion “sub-alliance” team comprising Thales, GE Power Conversion and L-3 which has overall responsibility for delivery of the entire power and propulsion system.