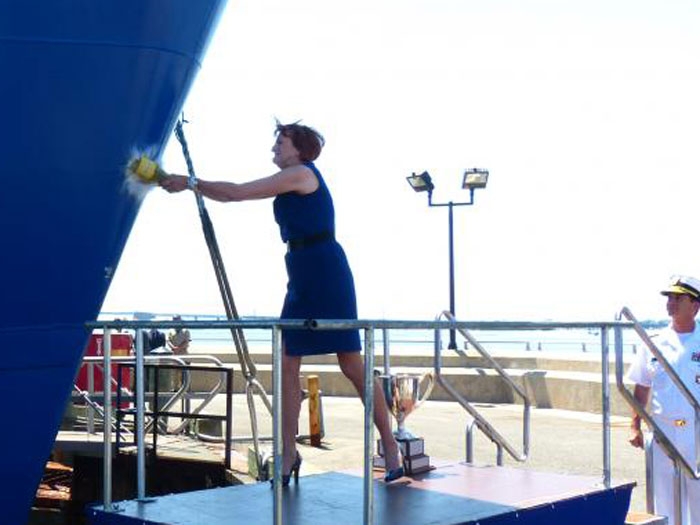 “The new Kings Pointer is yet another example of this Administration’s commitment to ensuring first-rate training and facilities for the Academy’s midshipmen,” said Secretary Foxx. “With this modern vessel, the USMMA will continue to produce the finest mariners in the world, helping ensure our national and economic security.”

“The Merchant Marine Academy has been a treasured part of this country since Congress commissioned its establishment in 1936,” said Senator Charles Schumer. “It is quite literally, the jewel of the sea, and given the continued role that Congress plays in its operations, it’s my responsibility as Senator to do everything I can to see this institution flourish. I’m thrilled to have worked in recent years to address three key issues at the Academy: finding inspiring leadership through a permanent Superintendent, rehabilitating Mallory Pier, and today bringing back the Kings Pointer, this critical training vessel. It’s a banner day for the Merchant Marine Academy.”

“The USMMA is the crown jewel of my Congressional District because of the tradition of service and professionalism of its midshipmen and this institution,” said U.S. Congressman Steve Israel. “The new Kings Pointer will ensure that midshipmen continue to receive superb training and preparation for serving our nation.”

“I am proud to join Secretary Foxx and Admiral Helis today as we rechristen the Kings Pointer,” said Congressman Tim Bishop. “Each year, we send our best and brightest to the U.S. Merchant Marine Academy to train to become our nation’s next military and transportation leaders. This vessel will provide a vital expansion of that training.”

The vessel’s sponsor was Mrs. Jan Ryan Helis. After thanking the Acting Maritime Administrator for the honor, she cracked a bottle of champagne against the bow and said, “I christen thee Kings Pointer.”

The crowd of faculty, staff, alumni and midshipmen responded with a loud cheer.