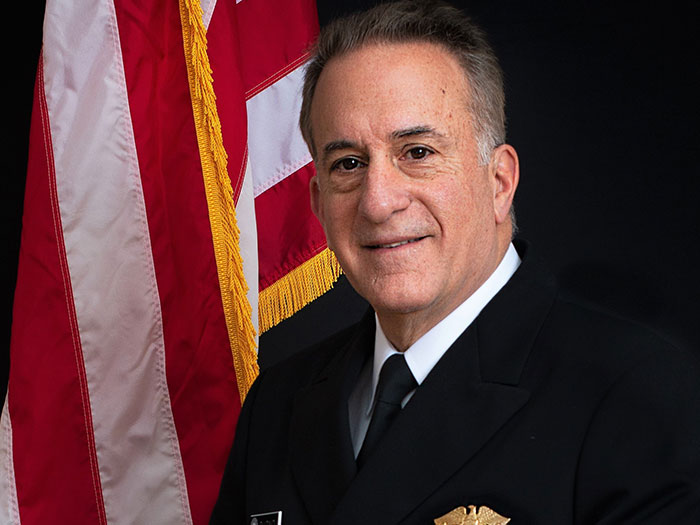 In what looks to have been one of her last official acts before stepping down from the Trump Administration, then Secretary of Transportation Elaine L. Chao promoted U.S. Merchant Marine Academy (USMMA) Superintendent, Rear Adm. Jack Buono, to Vice Admiral in the U.S. Maritime Service (USMS) at a small ceremony held Monday, January 11, in the Department of Transportation headquarters, Washington, D.C.

Vice Admiral Buono will continue to lead at USMMA, where he has been stationed since joining the Academy in November 2018. The promotion makes Vice Admiral Buono the first USMMA graduate to serve in this position at this rank.

Prior to his appointment as Superintendent, Vice Adm. Buono had nearly 40 years of maritime experience in the private sector. He retired from his last private sector employer in 2016.

“This well-deserved promotion is an indication of the trust and confidence we have in Vice Adm. Buono’s leadership in the critical role of preparing our Nation’s next generation of leaders—afloat and ashore,” said Buzby. “His steady hand on the wheel continues to steer Kings Point fair.”

The United States Maritime Service was established in 1938 under the provisions of the Merchant Marine Act of 1936 as a voluntary organization to train individuals to become officers and crewmembers on merchant ships. Despite their significant contributions to the Allied victory in World War II, USMS training establishments and facilities were deactivated in 1954, and the USMS was, with one exception, dissolved or absorbed into other federal departments. As the single exception to the deactivation, the Secretary of Transportation has the authority to maintain the tradition of uniformed USMS officer presence at the U.S. Merchant Marine Academy and the six state maritime academies. At USMMA, these uniformed officers include the Superintendent, Deputy Superintendent, Dean, Commandant, company officers, and many of the faculty.