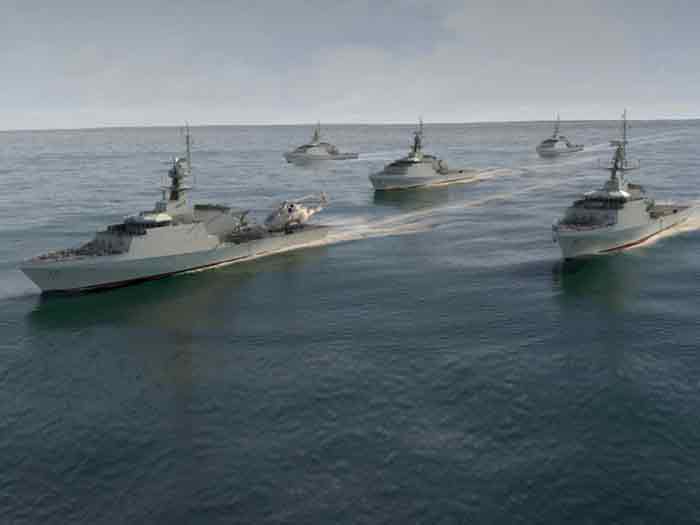 According to the Ministry of Defence, work on the five new vessels will sustain 800 jobs at shipyards on the Clyde through contracted work and preserve the manufacturing skills needed to build the Royal Navy’s future Type 26 frigates.

Iain Stevenson, Managing Director of BAE Systems Naval Ships, said: “Securing this contract for two further River Class OPVs is testament to the proven capability of the design and the tremendous skill and dedication of employees on the program. Our investment in the latest digital design technologies and new processes is enabling us to deliver equipment of the highest quality at the lowest possible cost, helping to secure the long-term future of our highly skilled industry in the U.K. I am looking forward to seeing both the OPV and Type 26 ships in construction across both our shipyards in Glasgow next year.”

This offshore patrol vessel design builds on the Royal Navy’s existing River Class ships with variants already in service in Brazil and Thailand.

The first OPV vessel, Forth, entered the water in August, less than two years after construction started, and is now docked at BAE Systems’ Scotstoun shipyard where she will complete final systems installation and testing before being delievered to the Royal Navy in the second half of 2017.

The second ship, Medway, is scheduled to enter the water in the spring of 2017 while the third ship, Trent, is currently at an advanced stage of assembly at Govan.

Chief Executive Officer at the MOD’s Defence Equipment and Support Organization, Tony Douglas, said the OPVs will have “a versatile flight deck, improved firefighting equipment and greater storage and accommodation than previous vessels, giving U.K. sailors a decisive advantage on a huge range of operations.

Like the other vessels in the class, HMS Tamar and HMS Spey will carry out counter-terrorism, anti-piracy, anti-smuggling and maritime defense operations, and are expected to be equipped with a 30 mm cannon and a flight deck capable of receiving a Merlin helicopter.

Displacing around 2,000 tonnes, they will have a maximum speed of 24 knots and will be able to sail 5,500 nautical miles before having to resupply.

BAE Systems is currently exploring a number of export opportunities with international customers for OPVs. The Brazilian Navy operates three Amazonas Class corvettes which are based on the design of the River Class OPV and were built at BAE Systems’ facilities in the U.K.