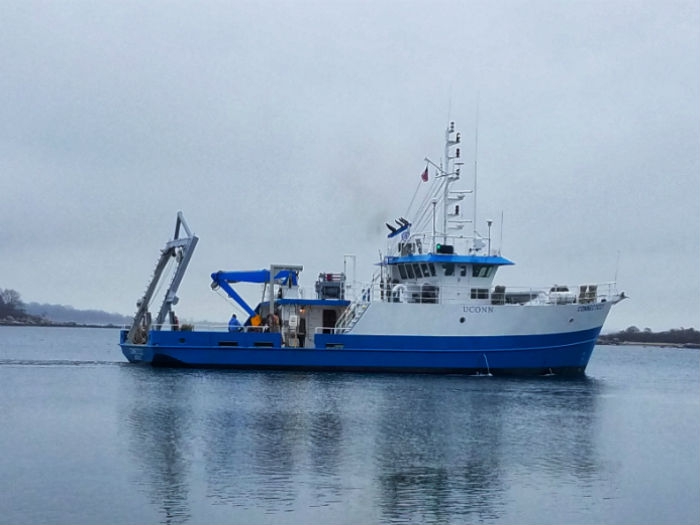 JANUARY 25, 2018 — The University of Connecticut’s 90 ft oceanographic research vessel R/V Connecticut has new life, with increased capability, thanks to a midlife refit.

The research vessel supports UConn’s Department of Marine Sciences, which is located on the university’s coastal campus at Avery Point, on the shores of Long Island Sound. Within the Department, faculty, staff, and students carry out cutting-edge research using observations and numerical models to conduct cross-disciplinary investigations in biological, chemical, physical and geological oceanography and marine meteorology.

Originally built at a length of 76 feet in 1998, the R/V Connecticut was in need of additional staterooms and lab space to meet the Department of Marine Sciences’ needs.

“Things were pretty cramped at the old length,” says Manager of Marine Operations Turner Cabaniss. “The vessel’s operations had outgrown what could be carried out easily and efficiently in the space available. To handle our operations, we needed increased interior space for both crew and scientific equipment.”

In early 2016, UConn selected naval architecture and marine engineering consultancy Glosten, Seattle, WA, to provide a contract level design of the vessel conversion and support the university throughout bidding and construction.

“Right off the bat, we made a concerted effort to fully understand how the existing boat was constructed,” says Glosten Project Manager Steve White, PE. “This enabled us to not only integrate the new hull extension, but also make many improvements in the legacy ship systems.”

Glosten’s redesign added a 14-ft “plug” to the midsection of the ship, creating space for six additional accommodation spaces, and doubling the size of both the wet lab and dry lab. The additional staterooms allow for an increased complement for overnight trips, as well as flexibility to better accommodate different distributions of men and women in each science party.

Modifications substantially increased the capacity of the fresh water, sewage, and fuel tanks to extend the vessel’s range and endurance.

The “stretch” and refit was completed at Blount Boats’ shipyard in Warren, RI.

White says, “The result is rewarding to see, since the lengthened vessel delivers both greatly increased capability and improved functionality to support operations.”