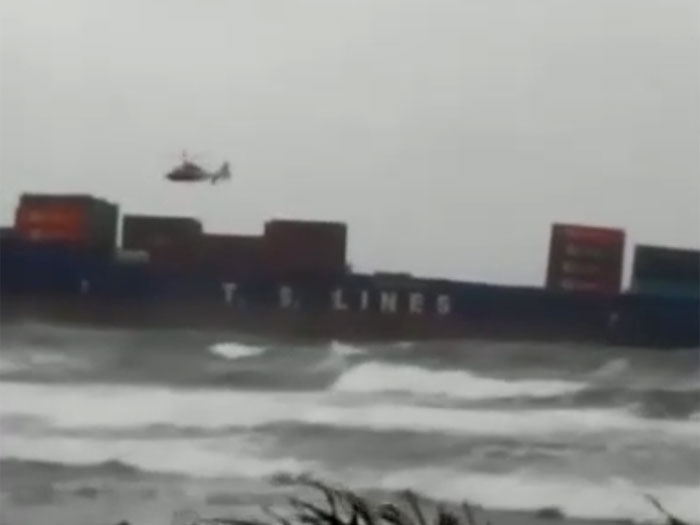 MARCH 11, 2016 — Taiwan media reported that two people died when a helicopter carrying five crashed into the sea off New Taipei City today while checking for oil slicks during an operation surveying pollution from a grounded containership.

The vessel, the TS Taipei owned by Taiwan’s T.S. Lines ran aground in heavy weather yesterday. The vessels 21 crew had abandoned ship in a liferaft when it lost power en route from Keelung to Hong Kong and were rescued by a helicopter from the Taiwan Ministry of the Interior’s National Airborne Service Corps.

The hull of the vessel was breached in the grounding, reports say, and oil boom was deployed around it.

Today’s tragedy occurred when the AS-365 helicopter was sent to the wreck on a pollution control mission. After safely depositing six specialists from the Environmental Protection Administration on board the ship, it took off to check for oil slicks, but crashed.

The helicopter was carrying two coast guard officers, two crew members and an engineer. The five were pulled from the sea, but one coast guard officer reportedly died as a result of being hit by a helicopter rotor and the pilot was pronounced dead after showing no signs of life on arrival at the hospital, say reports.

Video, apparently taken by a cell phone, has surfaced on YouTube showing the crash.