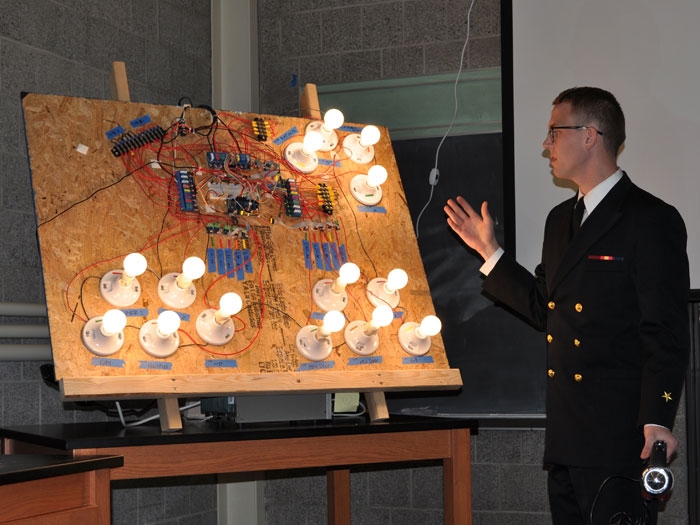 APRIL 26, 2015 — Fourteen light bulbs, representing electrical loads at different parts of campus, attached to a large plywood board lit up then, controlled by a sensor, turned off one by one or in small groups.

The board, though several square feet, was nowhere near as large as what it was made to represent – the 55-acre Fort Schuyler campus of SUNY Maritime College.

It was one of four or five senior design capstone projects in the maritime acadmy’s electrical engineering program. The task was to rebuild the college’s electrical grid using renewable energy. The project, the result of two semesters of work, was designed to test the students’ abilities to use and combine the knowledge they’d gained over their careers at SUNY Maritime.

“In other classes it’s hard to see what you’re doing,” said Mark Nash, a senior from Buffalo. “You take the tests but it’s like, do I really know this? Doing this demonstrated, yes I do know it. Also because it was our project, this was an incentive to say I don’t know this so well so maybe I need to take some time to really learn it.”

The groups decided which forms of electricity should power the campus, based on price, efficiency and environmental friendliness.Electrical engineering professor Yaqub Amani offered them a variety of choices, including solar, wind, tidal, natural gas, hydrogen fuel cells and conventional gas and diesel.

In their first semester of the project, the teams went to each building on campus, counting light bulbs to determine how much power their models needed to generate.

Among a variety of other investigations and calculations, each designed a simple preliminary model of their microgrid. In the second semester, they refined their design and built a scaled model, powered by batteries.

In addition to using greener energy sources, the campus microgrid that each group created would make the college more efficient and its power supply more stable. Microgrids, by definition, generate and use their own power, rather than relying on a grid maintained by an external company.

“When they graduate in a few weeks, some of these students may go on to work for power companies; we have many graduates working at Con Edison, for example,” Professor Amani said. “It is entirely possible, even probable, that they will have to balance costs and benefits and build these kinds of systems professionally. This gives them the chance to look at their education holistically.”

Additionally, two team of students from the class presented their work at the SUNY undergraduate research conference and in front of the international audience at the annual conference of the Advanced Energy Research and Technology Center this month at the Javits Center in New York City.