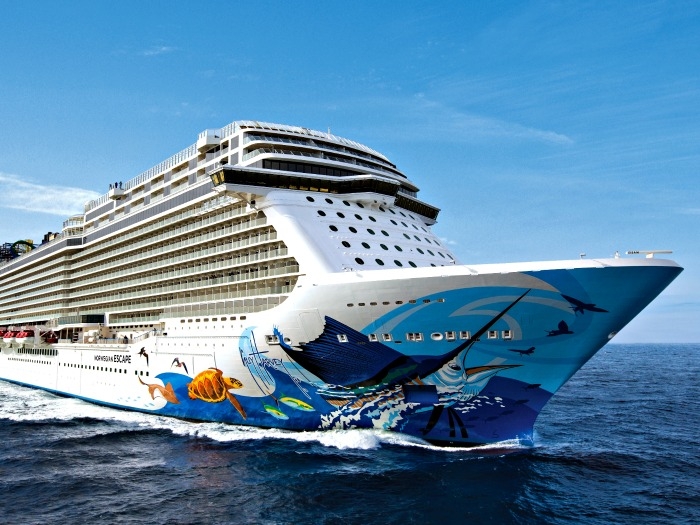 DECEMBER 21, 2015—The power of social media continues to grow. About 1.55 billion or 20 percent of the world’s population are active users of Facebook. Reality stars, politicos, jocks, and everyday jacks and jills regularly turn to Twitter and Instagram to share their opinions, images and anecdotes instantly with followers around the globe. Public companies and privately held corporations use their social media channels to engage their shareholders or investors.

That’s why it may come as no surprise that the 164,600 gt Norwegian Escape, the newest and largest of Norwegian Cruise Line’s 14-vessel fleet, experienced a record-breaking social media milestone during its inaugural celebrations from October 22 to November 11.

Satellite communications provider EMC, Miramar, FL, reports that guests on the Norwegian Escape logged 576,896 Facebook posts, 14,150 tweets and 11,367 Instagram posts for a total of 159 million impressions, surpassing the cruise line’s “social media usage at sea” record set during the 2013 inaugural events for Norwegian Breakaway, exceeded in 2014 with the Norwegian Getaway.

EMC provides an advanced hybrid communications network of satellite-terrestrial-cellular connectivity for the cruise ship passengers and crew that allows them to connect their smartphones and other devices to post pictures and updates, call friends and family, and stay connected for important business communications. The engagement was ongoing during Norwegian Escape’s inaugural voyages.  With seamless and complimentary access to Facebook, Twitter and Instagram, thousands of guests and media were able to participate in a variety of inaugural social media events, from a sail-along Instagram scavenger hunt to a secret menu that could only be unlocked with a tweet.

“We’re proud to set a new record for social media usage at sea during Norwegian Escape’s inaugural events, in partnership with EMC,” says Ross Henderson, Vice President, Onboard Revenue, at Norwegian Cruise Line.  “Our number one ambition is to exceed guest expectations and based on the hundreds of thousands of social media posts, it was clear we delivered on an outstanding experience, including connectivity.”

Brent Horwitz, President of Cruise and Ferry Services, EMC, says, “Our goal is to make sure our cruise partners’ guests and crew have the same connectivity experience on board as they have at home.  On top of that, Norwegian challenged us with a robust schedule of ongoing social media activities that significantly increased engagement and we were happy to exceed their expectations.  Our team is unsurpassed in the cruise communications industry when it comes to delivering on this level of service, and our patented technology approach and unmatched network make the at-sea experience feel more like that on land.”

As the leading provider of broadband communications and content at sea, EMC has tracked the majority of Internet traffic on cruise ships around the world since the advent of social media.  Recognizing the importance of guests staying connected, Norwegian and EMC have partnered to offer the best possible connectivity experience on board a cruise ship both at-sea and in-port.