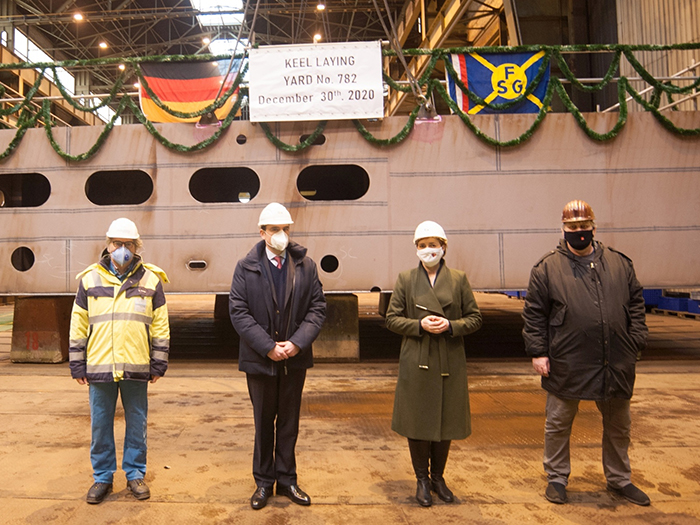 North German shipbuilder Flensburger Schiffbau-Gesellschaft (FSG) has laid the keel for a 210 meter Type 4100 RO/RO ferry. And it’s a safe bet that, under the masks, there were smiles on the faces of those taking part in the socially distanced but otherwise traditional ceremony.

“For FSG, today’s keel aying marks an important milestone, as this is the first order after restructuring and relaunching the shipyard in September 2020,” said the shipyard’s CEO Philipp Maracke. “This shipbuilding project is also significant for our 380 employees, who are now back to doing what they do best: building highly efficient ships. “

The fact that this vessel is being built to a proven design is of particular advantage both for the buyer as well as for FSG, Maracke stressed.

“As the Type 4100 RO/RO was developed by us and built here repeatedly, we are very familiar with its construction.” he said. “That makes it extraordinarily easy for the shipyard to ramp up.”

The EUR 14-million order for the RO/RO has been placed by IVP Ship Invest which also has an option for a second vessel. IVP Ship Invest is a company owned by Lars Windhorst, founder of investment group Tennor Holding, which controls the restructured FSG.

While FSG has long been a leader in the RO/RO sector, it aims to broaden its market.

“The shipyard will diversify in the future and we will increasingly act as a reliable partner to the German Navy and in international naval shipbuilding,” said Maracke. “To this end, we can build on earlier projects, as FSG continues to have a good reputation as a naval shipyard, even though we focussed on merchant ships in recent years.”