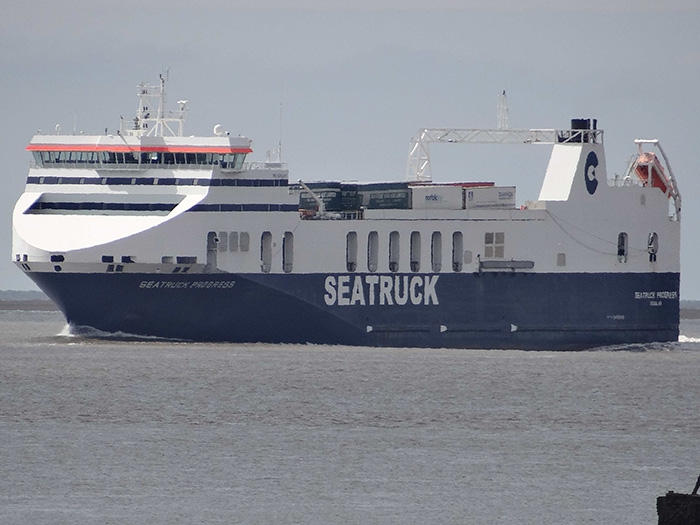 OCTOBER 25, 2017 — Irish sea freight ferry operator Seatruck has installed Optimarin ballast water treatment (BWT) systems in five of its vessels while they were undertaking normal operations, with its own crews carrying out most of the work themselves.

Seatruck runs a fleet of 10 advanced ferries, ranging in capacity from 65-150 trailers, with over 60 weekly departures. This regular sailing schedule, between set ports, ensured the company could call on local contractors to “hop on and off’ and carry out whatever engineering work the crews themselves couldn’t manage.

“We wanted Optimarin systems because of their track record of quality and approvals, but also because, with their modular nature and operational simplicity, they’re easy to install,” says Optimarin Fleet Director Benn Copack. “As a short sea operator we had the goal of carrying out all the work while the ships were in service, with no downtime, thus keeping costs as low as possible.

“With the Optimarin systems and service – quickly responding to any queries or issues we encountered – this wasn’t a problem. Our own crews actually performed the vast majority of work themselves using Optimarin’s manuals. They were really proud of the excellent work they did, and rightly so.

“We’re very pleased we took this approach, ensuring port state compliance and BWT reliability ahead of regulatory demands.” Seatruck began installation onboard the 5,300 dwt Seatruck Progress in November last year. The remaining four systems were installed between January and the end of September this year.

“This is the first time I’ve heard of a shipowner installing this number of systems themselves while their vessels are in service,” comments Optimarin CEO Tore Andersen. “It’s a testament both to their mission to provide optimal efficiency to their stakeholders and customers, and to the simplicity of our environmentally friendly, UV-based system.

“With the ratification of the IMO Ballast Water Management convention, and the strict regulations imposed by the US Coast Guard, the entire world fleet needs to find proven, effective and reliable systems to ensure compliant sailing. This has the potential to create huge bottlenecks at yards – and obviously increase installation costs. However, Seatruck has shown that, with a system as straightforward and effective as ours, there is another way. I think that’s something that will really resonate with shipowners worldwide.”

Optimarin has now received orders for over 520 systems, with more than 330 installed worldwide, of which 150 are retrofits. The firm, which has focused exclusively on BWT since its formation in 1994, was the first to receive full USCG approval for its system, gaining certification in December last year.

“The market is picking up gradually,” Mr. Andersen says. “Shipowners need to comply and they need systems that they can rely on. We’ve spent over 20 years developing and refining our solution and can offer them unrivalled expertise and service. With our sound financial base, strong group of investors, and experienced global partners – including Goltens and Zeppelin – we can give owners not just the technology they need, but the long-term peace of mind and performance they require.”

The Optimarin Ballast System (OBS) is fully approved by both IMO and USCG, with certification through DNV GL, Lloyd’s, Bureau Veritas, MLIT Japan, and American Bureau of Shipping.