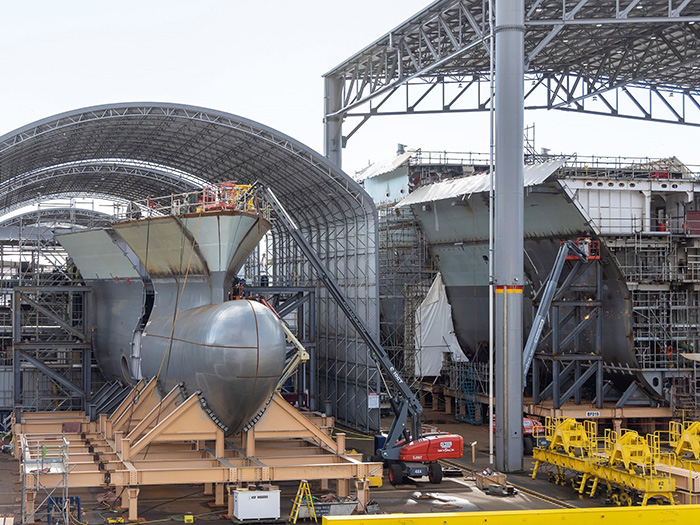 Construction of the first JSS is well advanced, with over 90% of the ship’s blocks currently in production. [Photo: Seaspan Shipyards]

Canada’s Seaspan Shipyards reports that it has awarded more than $1 billion in contracts to date to 140 Canadian companies from coast to coast that are supporting design and construction of two Joint Support Ships (JSSs) for the Royal Canadian Navy.

Seaspan will award JSS further contracts to its Canadian supply chain partners as additional services and materials are required between now and 2025 when the second JSS will be delivered.

The two JSSs, which are the largest naval ships by length ever to be constructed in Canada, are being built as part of Canada’s National Shipbuilding Strategy (NSS).

The JSS program is expected to sustain 3,900 jobs in the Canadian marine industry between now and 2025, including more than 1,000 at Seaspan.

Construction of the first JSS is well advanced, with over 90% of the ship’s blocks currently in production. One of the 1,500-tonne grand blocks of JSS 1 was recently moved into final position in the shipyard, and the major blocks that make up the ship’s bow section, including the bulbous bow, are also being integrated.

Seaspan is now preparing for the arrival and installation of the main engines.

The JSSs are the second class of NSS ships being constructed at Seaspan’s Vancouver Shipyard. In October 2020, Seaspan completed the first full class of ships under the NSS, delivering three Offshore Fisheries Science Vessels (OFSVs) to the Canadian Coast Guard in just 15 months. Construction and delivery of the third OFSV was completed by working continuously, and safely, through the COVID-19 pandemic.

Later this month, Seaspan is expected to begin construction on its third class of vessel for the NSS, the Offshore Oceanographic Science Vessel (OOSV) for the Canadian Coast Guard. The JSS and OOSV will be constructed concurrently at Seaspan’s modern, high-capacity shipyard in North Vancouver.

Seaspan is expected to begin awarding contracts for the construction phase of the OOSV program shortly.