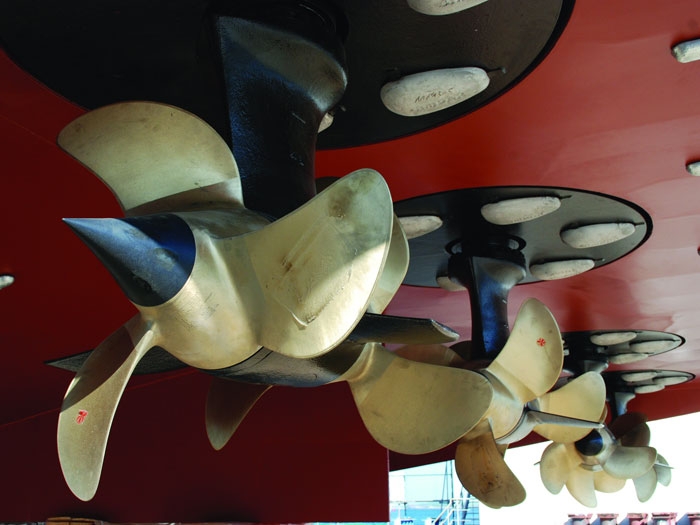 APRIL 30, 2014 — Schottel reports that some 40 European river cruise vessels are either fitted, or will be fitted, with a propulsion concept involving four Schottel Twin Propellers STP 200.

The concept was specifically designed for river cruise ships and over the past five years has gained wide acceptance thanks to advantages such as low-noise, shallow draft, increased overall efficiency and energy efficient operation.

Using four Twin Propellers rather than the usual two allows the propeller diameters to be smaller, reducing the vessel’s draft approximately 1.60 m. Therefore the ships sail smoothly even in shallow waters, says Schottel.

The highly elastic mounting of the STP effectively damps the pressure impulses induced by the blades. The reduced diameter of the propellers allows a spacious clearance between the propellers and the hull and results in a low structure-borne noise level.

The small propeller diameter of 1,050 mm requires only minor tunneling of the ship’s stern. The resulting stern lines increase propulsion efficiency significantly in comparison with high tunneled ships. Additionally, the propulsion system with four Schottel Twin Propellers 200 has a very low thrust-deduction coefficient thanks to the clearance between propeller and hull. Hence, almost the entire thrust can be converted into propulsive power.

One or two Schottel Pump Jets oftype SPJ 82 RD serve as additional drives in the bow. These are characterized by their compact and rugged design and are suitable as main and auxiliary drives.

The steering of the four unit propulsion system contributes to operational safety. As with a dual propulsion system, steering is controlled via two joysticks, one for the two units portside and one for the two units starboard. Apart from a few details, the bridge does not differ from that of a double unit. As a result, captains can easily change between a fleet’s different vessels.

The operational safety of the ship itself is enhanced by the 9-fold redundancy of the propulsion system: the four Schottel STP 200 main propulsion units each have redundant control. The Schottel SPJ 82 RD ensures the redundancy additionally.

Currently the propulsion concept is available with four mechanical STP 200 in both a diesel-direct and a diesel-electric version as well as with four electric Schottel Combi Drives (SCD 200). The Schottel propulsion portfolio for river cruise ships also includes a variety of individually tailored concepts for different river cruise providers. These range from the traditional concept with two Schottel Twin propellers to river cruise vessels operating with Schottel Pump Jets as main propulsion units.