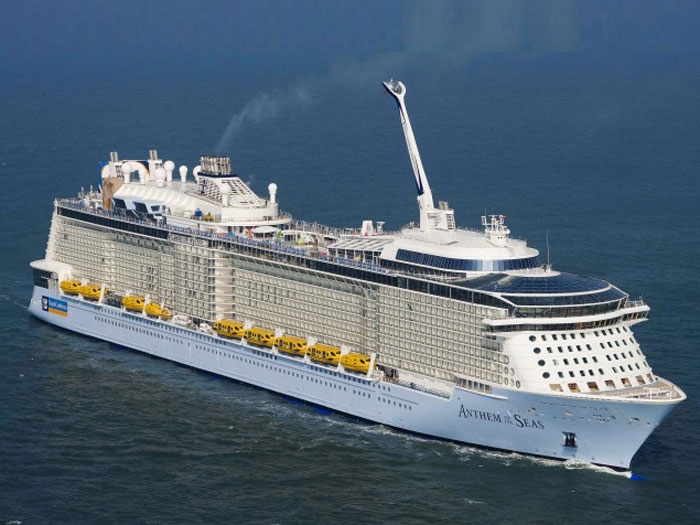 Second Quantum class cruise ship, Anthem of the Seas, is about to make its New York debut

Meyer Werft delivered the second Quantum Class ship, Anthem of the Seas, from its Papenburg, Ems, shipyard in April of this year. The third, Ovation of the Seas, is set for mid-2016 delivery and the fourth is planned for delivery in 2019.

"It is such a pleasure to announce the order of another Quantum-class ship as we are welcoming Anthem of the Seas to North America," said Richard D. Fain, Chairman and CEO, Royal Caribbean Cruises Ltd. "These ships have been received with excitement, and performed exceptionally well, across the globe. We fully expect that momentum to continue as we add to this innovative class of ships."

"At Royal Caribbean we are focused on continuously improving efficiency and sustainability, and the fifth Quantum class vessel will be clear evidence of this," said Michael Bayley, President and CEO, Royal Caribbean International. "Of equal importance is our ability to consistently surpass guest expectations, and we are harnessing the power of the latest technology to do so on this ship."

Following are the main particulars of the Quantum Class ships. If the numbers don't quite convey how big these ships are, take a look at the infographic below, released by Royal Caribbean as the Anthem of the Seas is set to make its New York debut.

NOVEMBER 3, 2015 — Royal Caribbean Cruises Ltd. (NYSE, OSE: RCL) today announced that it has entered into an agreement with shipbuilder Meyer Werft in Germany to order a fifth Quantum-class cruise ship for delivery in the Fall of 2020.