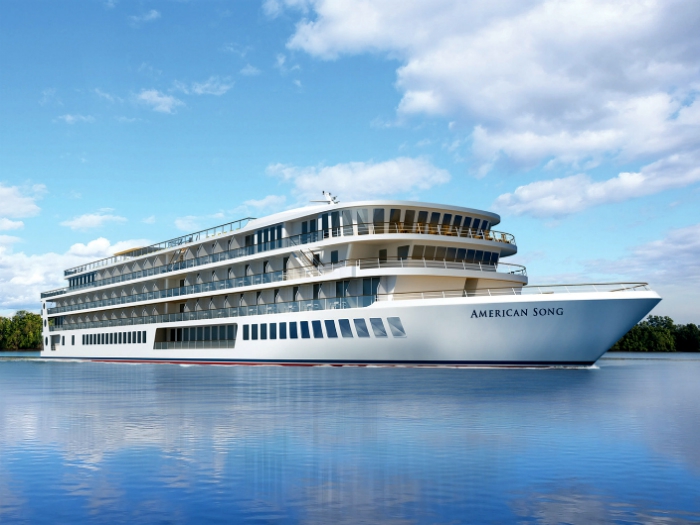 NOVEMBER 24, 2017—Operators are investing in new vessels to keep up with the increasing popularity of river cruising in the U.S. and Europe. Cruise Lines International Association (CLIA)—which represents about 95 percent of the global cruise capacity—reported earlier this year that its members planned to add 13 new vessels to the fleet of 184 river cruise vessels. Since that time, additional investments have been announced.

The first ship in ACL’s new Modern Riverboat Series, American Song will begin operating next fall on the Mississippi River and will then be repositioned on the West Coast in 2019 for ACL’s Columbia and Snake River itineraries.

ACL says was the five-deck vessel was launched seven weeks ahead of schedule. Chesapeake Shipbuilding is now adding the ship’s upper decks and outfitting the vessel in its East Outfitting Basin.

Among the ship’s features is a retractable rotating gangway that extends from ship’s bow that allows passengers to walk directly from its main deck to a river bank or dock.

Dutch supplier Veth had a breakthrough earlier this year when it announced its propulsion equipment would be fitted on one of the largest vessels being built for the European river cruise market. The 194-passenger river cruise vessel AmaMagna (shown at right), being built at Vahali Shipyards, for AmaWaterways, will be equipped with quieter and fuel-efficient Veth Hybrid Drive rudder propellers. This counter rotating stirrer propeller has a diesel-direct and an electric drive. With this system people can choose the drive which perfectly suits the sailing profile and ensures a better engine load in relation to fuel consumption, lower fuel consumption over total speed range and has lower maintenance costs.

AmaWaterways, based in Calabas, CA, has a fleet of 22 river cruise vessels. The AmaMagna will debut on the Dabube River in 2019.

Meanwhile, another California-based cruise line, Viking River Cruises, announced this past October an order for seven new river cruise ships for Europe that will debut in 2019. Six of the ships will be based on the company’s Viking Longships design (shown at left) and operate on the Rhine, Main and Danube River itineraries. Accommodating 190 passengers in 95 staterooms, Viking Longships have a patented layout that allows for two Explorer Suites – the largest river cruise suites in Europe – as well as seven two-room Veranda Suites with a full-size veranda in the living room and a French balcony in the bedroom.

The seventh ship is being designed specially for the company’s Portugal’s River of Gold itinerary. As a result of high customer demand, the new sister ship will join Viking’s existing fleet of three ships on the Douro. Hosting 106 passengers in 53 staterooms, the Douro ships are smaller than Viking Longships, but feature many of the same popular features – including an Aquavit Terrace, a wide variety of stateroom choices, onboard solar panels and an organic herb garden, as well as Viking’s signature Scandinavian design aesthetic.