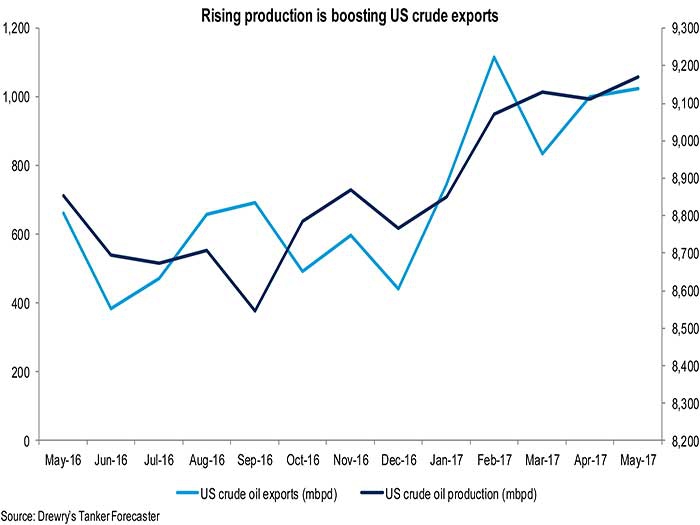 AUGUST 11, 2017 — Rising long haul exports of crude oil from the U.S. and Nigeria will not be sufficient to push tanker shipping freight rates higher, given lower anticipated Middle East output and surging tonnage supply, according to the latest edition of the Tanker Forecaster, published by shipping consultancy Drewry.

Although a slight slowdown in global oil demand growth and inventory drawdown because of the ongoing production cut by OPEC is capping global the oil trade, the impact of lower OPEC output is partly counterbalanced by rising long-haul trade, says Drewry. With the lower supply in the Mid East, Asian refiners have increased their imports from the U.S., Brazil and Nigeria, where production is rising.

Rising U.S. production this year is leading to a surge in the country’s crude exports against the earlier trend of a decline in imports with the rise in production. U.S. oil exports have surged higher to 0.9 mbpd this year, compared to 0.5 mbpd last year, whereas imports have remained stable. As US production is expected to climb higher in the coming years and majority of it is likely to move to Asia, a long-haul trade, this will positively affect the tonne-mile demand for tankers. Similarly, the expected increase in long-haul exports from Nigeria and Brazil to Asia will also be supportive for tonne-mile demand. Nigeria’s crude production is expected to increase to at least 1.8mbpd from the current 1.6 mbpd.

However, the expected increase in long-haul trade will not prove enough to push rates higher as the global oil trade will be capped by the inventory drawdown and a slowdown in oil demand growth.

“While global oil trade is expected to increase by around 6% during 2017-19, tonne-mile demand is expected to increase relatively faster by 7% due to an increase in long-haul trade. As the supply is seen surging by more than 13% during this period, freight rates will decline further,” commented Rajesh Verma, Drewry’s lead analyst for tanker shipping.

Categories: News Tags: Drewry, exports of crude oil from the US, tanker