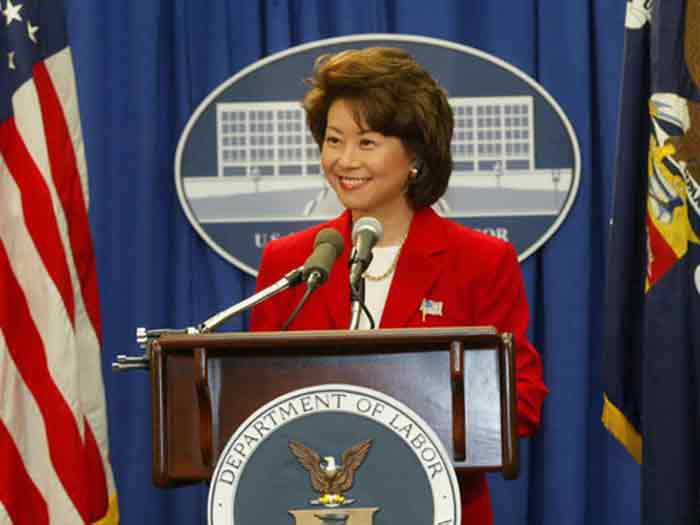 NOVEMBER 30, 2016 – President-elect Donald J. Trump’s selection of Secretary Elaine L. Chao as the next United States Secretary of Transportation is being widely welcomed across the U.S. maritime industry

Offering its congratulations, the American Maritime Partnership, which serves as the voice of the domestic maritime industry, said that “with vast experience across the maritime industry and prior service at the U.S. Department of Transportation, Maritime Administration, and Federal Maritime Commission, Secretary Chao understands the critical role our industry plays in advancing the nation’s economic and national security.”

“There is nobody better qualified to be Secretary of Transportation than Elaine Chao,” said SIU President Michael Sacco. “Throughout her time in government, Elaine Chao has long been a steadfast friend to the SIU and to maritime labor. The industry has no better supporter than Elaine Chao, and she has stood up to defend the Jones Act, the Maritime Security Program, cargo preference and the other key programs that keep our industry alive. She understands the importance of providing jobs to America’s working families, and she has seen firsthand the value of the United States Merchant Marine to our nation’s defense and prosperity. We look forward to working with her again.”

Secretary Chao was a frequent speaker at the Maritime Trades Department as well as at SIU and its affiliates’ conventions, and has been a familiar face at the SIU’s affiliated training school in Piney Point, Maryland.

Shipbuilders Council of America President Matthew Paxton said:
“The Shipbuilders Council of America applauds President-elect Donald J. Trump’s announcement of his intent to nominate Elaine Chao as the next Secretary of Transportation. Throughout her distinguished career in the public, private and nonprofit sectors, she has worked to strengthen our nation’s economy and competitiveness in a global economy. Moreover, she understands the critical nature of the Jones Act and its role in maintaining the U.S. shipyard industrial base. This industrial base is integral in order for the U.S. to build and maintain the most sophisticated and advanced vessels for our U.S. Navy and Marine Corps.”

Edward Wytkind, president of the Transportation Trades Department, AFL-CIO (TTD), said that Secretary-designate Chao’s “many years of public service will serve her well in carrying out the difficult task — as the President-elect has promised — of rebuilding our badly aging transportation system and infrastructure.

“Secretary-designate Chao has an opportunity to play a large role in living up to the commitments made by President-elect Trump that he would rebuild the middle class through job-creation policies. Advancing massive federal investment in new transportation projects is one of the best policy strategies for improving our economy, boosting American competitiveness and putting millions to work.”

U.S. Rep. Bill Shuster (R-PA), Chairman of the House Transportation and Infrastructure Committee, released the following statement on the selection:

“From the start, it was my hope that President-elect Trump would select someone to run the Department of Transportation who has a background leading large organizations, knowledge of how Congress and the legislative process work, and the right mixture of public and private experience necessary to oversee a bold agenda to transform America’s transportation and infrastructure systems for the 21st Century. Elaine Chao embodies these qualities.

“America faces a number of important challenges when it comes to our transportation networks that will require strong leadership from the executive branch. I am committed to working with Secretary Chao and President Trump to make responsible investments in our infrastructure, streamline transportation improvements, reduce regulatory burdens, encourage private-public partnerships, and encourage innovation to preserve and strengthen America’s economic competitiveness.”