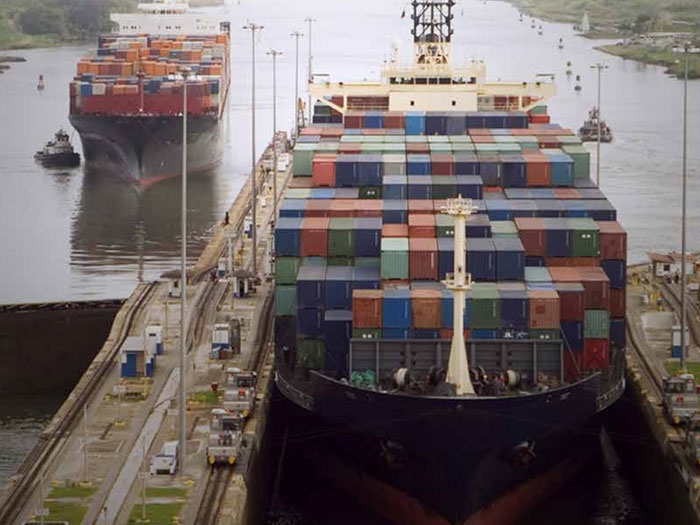 AUGUST 5, 2014 — A marine insurer is warning of the increased risks that will arise from doubling the cargo-carrying capacity of ships transiting the Panama Canal.

In a new report entitled Panama Canal 100: Shipping Safety and Future Risks, marine insurer, Allianz Global Corporate & Specialty reports that the value of insured goods transiting the canal zone may increase by over US $1 billion per day following completion of the Third Set of Locks Project.

It is forecast the expansion will enable between 12 and 14 larger vessels per day (approximately 4,750 additional ships per year) to pass through the canal. Many are expected to be new-Panamax class container vessels of 12,600 TEU, which are far larger than the existing largest vessels able to access the canal (4,400 TEU).

“Larger ships automatically pose greater risks,” says Captain Rahul Khanna, the insurer’s Global Head of Marine Risk Consulting. “The sheer amount of cargo carried means a serious casualty has the potential to lead to a sizeable loss and greater disruption. For example, a fully-loaded new-Panamax 12,600 TEU container ship is as long as four football fields with a beam of up to 160 feet and could have an insured cargo value alone of $250 million.”

If operating at its full projected capacity following expansion, Allianz Global estimates that this could result in an additional $1.25 billion in insured goods passing through the canal in one day, with larger ships playing a critical role in increasing throughput capacity.

However, such vessels can pose serious salvage challenges in a congested shipping environment, even potentially leading to blockages. In the event of an accident there may be an insufficient number of qualified experienced salvage experts available to handle the new- Panamax ships.

The potential impact of any shipping incident is much wider than just impeding progress through the Panama Canal. With larger ships on the move in the surrounding region, an incident could also affect traffic at major ports in the United States and elsewhere, resulting in a potential increase in business interruption and insurance losses.

In addition, a number of U.S. ports and terminals on the East and Gulf Coasts are exposed to hurricanes. Larger ships carrying higher concentrations of insured goods will spend more time in these ports, posing an increased risk. For example, a large portion of Superstorm Sandy losses in 2012 were due to storm surge that flooded ports in the Northeast region of the US.

To cater to the larger ships changes are also needed at global ports along the canal’s supply chain, posing a number of further challenges. Additional infrastructure upgrades will be needed in the form of larger gantry cranes to work these larger ships and to handle the increase in volume. Processing capability will need to be improved to avoid bottlenecks at choke points in ports. Navigability is critical: air and water drafts need to be sufficient to allow safe passage of the larger container ships.

Another major challenge is the actual handling of larger vessels. Port operating procedures will have to be reviewed with regard to wind and weather constraints given the tight operating margins that these ships will be facing.

Conversely, an expanded all-water route from Asia to the US East/Gulf Coast could actually lead to a risk reduction in another area, as Captain Allan Breese, Senior Marine Risk Engineer at Allianz Global, explains: “The longer you can keep a container on a ship and are not making multiple transloadings on to trains and various other modes, the better.”

Allianz Global believes training is key to mitigating the new risks involved, both in the canal region itself and in affected ports.

“The expansion of the Panama Canal will represent a new shipping environment for many mariners,” says Captain Khanna. “Due to the increase in the number of larger vessels passing through this important waterway the level of training provided to pilots will be extremely important. Attempting to maneuver one of these vessels through such a restricted space in itself creates a much bigger hazard.”

The Panama Canal Authority has invested heavily in training, including plans to charter a post-Panamax ship to practice maneuvers through the new lane.

However, training cannot prepare mariners completely for the live environment as Captain Khanna points out: “It is extremely important that the processes and systems in place are dynamic and that the industry learns from mistakes as it goes along, because inevitably a few will be made. Although much training will be done, this can only be done on a few vessels. But when the canal is opened for real, a whole host of different vessels with different characteristics will be passing through. That will be challenging.”

Allianz Global analysis identifies that the Panama Canal region has a steadily improving safety record over recent years, with the relatively small total of 27 shipping casualties from over the past decade including just two “total losses.”

This accident rate of around 1 in every 4000 transits compares favorably with other major waterways such as the Suez Canal (1 in 1100 transits) and the Kiel Canal (1 in 830 transits). As the most frequently transiting types of vessel, bulk carriers (11), cargo ships (9) and container ships (9) dominate the canal’s casualty list, collectively accounting for over 75 percent of all incidents since 2002.