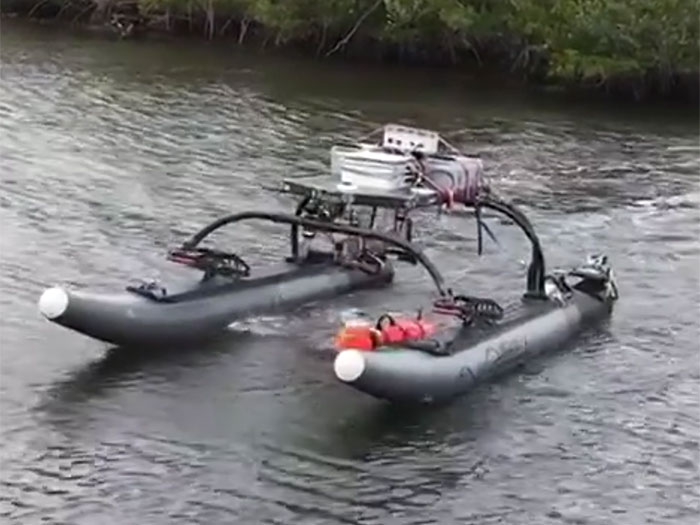 MAY 29, 2018 — Florida Atlantic University’s College of Engineering and Computer Science has been awarded a $1.25 million grant by the U.S. Office of Naval Research (ONR) to undertake research in support of autonomous unmanned marine vehicle platforms for coastal surveillance, coastal surveys, target tracking and protection of at-sea assets.

The five-year project will entail developing unmanned surface vehicles that serve as motherships for unmanned underwater vehicles and aerial drones, thereby enabling a multi-vehicle, multi-domain capability that may serve as a mobile coastal monitoring system, as well as training and education of graduate and undergraduate students in ocean engineering.

The project will leverage and collaborate with FAU’s ongoing Naval Engineering Education Consortium effort in conjunction with the Naval Surface Warfare Center, Panama City, which involves use of two unmanned underwater vehicles (UUV) for adaptive subsurface sensing in support of detection of objects on the sea bottom.

“Fostering collaborative partnerships in scientific research is essential to ensuring that the United States remains at the forefront of innovation and technology,” said Stella N. Batalama, Ph.D., dean of FAU’s College of Engineering and Computer Science. “We are very pleased to continue our relationship with the Office of Naval Research. This latest grant will enable us to develop important technology that will help to secure our U.S. coastal waters and our assets at-sea both nationally and globally.”

FAU researchers will develop capabilities for multi-sensor perception, collision avoidance, simultaneous localization and mapping (SLAM), and improved low-level control in adverse weather conditions. Capabilities will also be developed for a USV to serve as a docking station for power and data transfer between the USV and UUVs and aerial drones. Implementation of the SLAM algorithm will provide the USV a world map in support of situational awareness and improved navigation and path planning.

“Our focus will be on developing a multi-vehicle system that can safely and reliably navigate coastal waters with a high level of autonomy while performing assigned tasks,” said Manhar Dhanak, Ph.D., principal investigator of the award and professor and director of SeaTech – The Institute for Ocean and Systems Engineering in FAU’s Department of Ocean and Mechanical Engineering. “We will build on our ongoing efforts and leverage technological advances in sensor systems for perception and communication, as well as in computer architecture and robotic frameworks.”

Within the last decade, interest in UUVs as part of specific military, industrial and academic missions and applications have increased due to technological innovations and the evolution of their sensor payloads. Missions such as persistent surveillance, anti-submarine warfare, oceanography and mine countermeasures are among key advantages of utilizing UUVs as compared to other platforms.

The U.S. Navy has identified several major benefits of unmanned vehicles in maritime surface and sub-surface applications. They are far less expensive to operate and maintain than manned vehicles, and automated sensors can maintain near-constant awareness and coverage of an environment. Near-constant surveillance also provides persistence in data collection, which enables a better understanding of long-term behavior patterns and trends. Unmanned platforms also have the potential to improve productivity and foremost, they keep human sailors and expensive manned platforms away from danger.

Dhanak will spearhead the project working with a team of engineers, a post-doctoral associate, and graduate and undergraduate students at SeaTech.

Located in Dania Beach and established in 1997 as a state-funded type II research center, SeaTech – The Institute for Ocean and Systems Engineering is part of FAU’s Department of Ocean and Mechanical Engineering, and the College of Engineering and Computer Science. Ocean engineering research and technology development focuses on acoustics, marine vehicles, hydrodynamics and physical oceanography, marine materials, nano-composites, applied ocean systems, and ocean energy technologies.