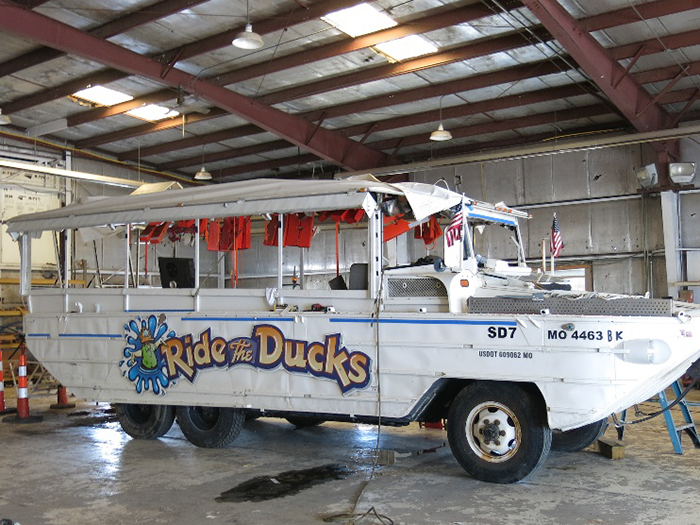 The National Transportation Safety Board (NTSB) said during a public board meeting Tuesday that the continued operation of amphibious passenger vessel Stretch Duck 7 during severe weather led to the fatal July 19, 2018, sinking of the vessel on Table Rock Lake, near Branson, Mo.

The 33 foot long modified, World War II-era DUKW amphibious passenger vessel, operated by Ripley Entertainment Inc., doing business as Ride the Ducks of Branson, sank during what the NTSB termed a derecho (defined by NOAA as “a widespread, long-lived wind storm”). The vessel had 29 passengers and two crewmembers aboard for a tour. One crewmember and 16 passengers died in the accident.

Ride the Ducks of Branson continued to operate waterborne tours after a severe thunderstorm warning had been issued, says NTSB. This exposed the vessel to the derecho, which resulted in waves flooding through a non-weathertight air intake hatch on the bow, which caused the vessel to sink, the NTSB determined.

Contributing to the duck boat’s sinking was the U.S. Coast Guard’s failure to require sufficient reserve buoyancy in amphibious vessels. NTSB investigators found that the accident vessel was originally constructed with a low freeboard, an open hull, and no subdivision or flotation, resulting in a design without adequate reserve buoyancy. Additionally, the NTSB cited previous inaction to address emergency egress on amphibious passenger vessels with fixed canopies which impeded passenger escape from the Stretch Duck 7.

Tuesday’s board meeting was held virtually due to the COVID-19 restrictions on public gatherings. The proceedings were also webcast, a standard procedure for all board meetings.

“Had Ride the Ducks employees taken more appropriate actions and made better decisions, it is likely the duck boat would not have sunk, because they would not have continued operations based on the weather forecast and prevailing conditions,” said NTSB Chairman Robert Sumwalt.