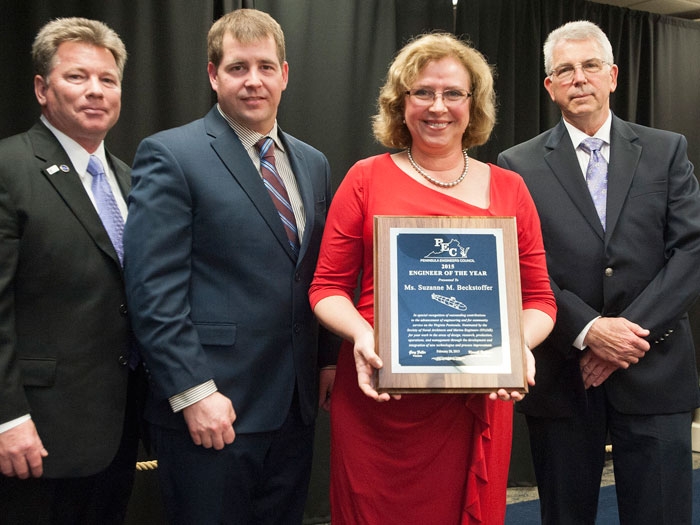 Ms. Beckstoffer was nominated for the award by the Hampton Roads section of the Society of Naval Architects and Marine Engineers (SNAME).

“Among the four highly qualified candidates nominated this year for the Peninsula Engineer of the Year Award, Ms. Beckstoffer’s exceptional record of leadership, technical accomplishments, contributions to the profession and contributions to the community stood out above the nominees,” said Gary Fuller, president of the Peninsula Engineers Council.

Since her career began with Newport News in 1982, Ms. Beckstoffer has made several technical contributions to shipbuilding and ship design. She has helped the company implement new technologies, including computer-aided design, manufacturing automation, robotics and three-dimensional product model environments. Currently, she is responsible for the engineering and design computer tools and processes used to support ship design, construction and overhaul programs.

“We are proud to have Suzanne recognized by the Peninsula Engineers Council for her hard work, dedication and expertise,” said Jennifer Boykin, Newport News’ vice president of engineering and design. “Throughout her career at the shipyard, she has been at the forefront of implementing new technology to improve our work in engineering design, touching every aspect of our shipbuilding business.”

Ms. Beckstoffer has dedicated more than 30 years of service to SNAME, holding leadership roles from the local to international levels. She is also a member of the Chi Epsilon and Tau Beta Pi engineering honor societies and serves on the industry advisory boards of North Carolina State University, the Webb Institute and Christopher Newport University.

“I’m grateful and honored to receive this award,” Ms.Beckstoffer said. “I’ve known I wanted to be an engineer since age 15, when my high school math teacher took me to N.C. State for an engineering careers seminar. Solving technical challenges and helping build the world’s most complex ships has been a rewarding career. After more than 30 years at Newport News, I’m proud to be a shipbuilder!”
Formed in 1970, the Peninsula Engineers Council comprises representatives from organizations dedicated to strengthening and promoting the engineering profession in the Virginia Peninsula area. The member organizations consist of 17 local chapters of engineering and technical societies, a local science and education foundation, and two government organizations.