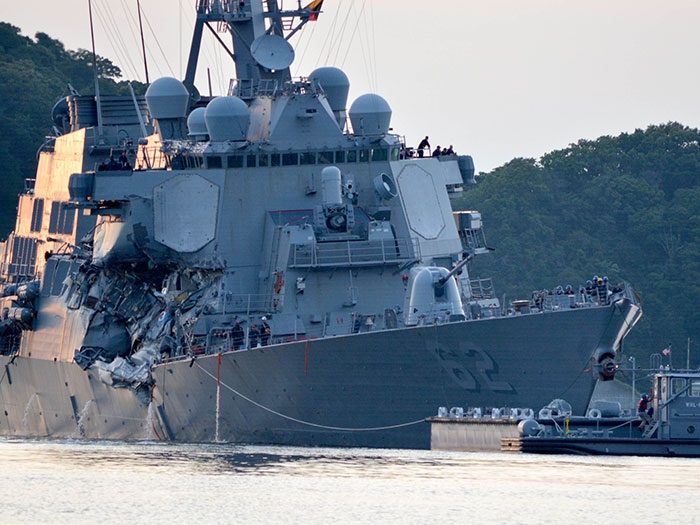 The Navy has dropped courts martial proceedings against the former commanding officer of the USS Fitzgerald (DDG 62) Cmdr. Bryce Benson and former crew member Lt. Natalie Combs. However, at the recommendation of Chief of Naval Operations Adm. John Richardson, Secretary of the Navy Richard V. Spencer has issued a Secretarial Letter of Censure to each of them.

Seven Navy sailors were killed in the deadly June 17, 2017 collision between the Fitzgerald and the Philippine-flagged merchant vessel ACX Crystal.

The Navy says that the decision to issue the letters of censure “is in the best interest of the Navy, the families of the Fitzgerald Sailors, and the procedural rights of the accused officers. Both officers were previously dismissed from their jobs and received non-judicial punishment.” It adds that “thecomprehensive program to improve Navy readiness and training, to do everything possible to ensure that accidents like this will not recur, remains on track.”

FAILED TO MEET THE MOST BASIC RESPONSIBILITIES OF A COMMANDING OFFICER

The letter to Benson says in part, “you failed to meet the most basic responsibilities of a Commanding Officer at sea: the safe navigation of your ship and the safety of your crew. Immediately preceding the collision, you went to your cabin, leaving an inexperienced watch team, lacking in confidence, and technical competence. In doing so, you disengaged and removed yourself from the tactical control and supervision of your ship – while operating at night, in close proximity to land, and in an area with a high volume of maritime traffic. Your lack of presence on the bridge in a challenging operating environment, combined with the inexperience, incompetency and lack of cohesion of your watch team – a watch team that you approved – failed to meet your obligations as Commanding Officer. You further aggravated your poor decisions by failing to implement any mitigation measures, such as ordering the Executive Officer or Navigator to supervise the team on the bridge in your absence.

“Your failure is not limited to the time immediately preceding the collision. As the Commanding Officer, you were singularly responsible for assessing and balancing risk. For the entirety of the time you served as the FITZGERALD Commanding Officer, you abrogated your responsibility to prepare your ship and crew for their assigned mission. Instead, you fostered a command characterized by complacency, lack of procedural compliance, weak system knowledge, and a dangerous level of informality. On the day of the collision, you fai led to approve an adequate watch bill that managed the fatigue of your watch standers, failed to revise standing orders or procedures to account for the operational circumstances and degraded equipment, and authorized a poorly designed navigational track that included transiting faster than safe speed in a heavily trafficked area.”

The letter to Combs, who was serving as Fitzgerald’s Tactical Action Officer, says, in part, “as an experienced watch stander, you were responsible for ensuring basic watch standing principles, and it was your lack of adherence to those principles and your contribution to a culture of complacency, lack of procedural compliance, lack of system knowledge and a dangerous level of informality. This lax culture that you helped propagate contributed to the collision and the deaths of our Sailors.

“As a naval officer, you were entrusted with the safety of your ship and shipmates. You abrogated your responsibilities to uphold that trust, by both your actions and inactions. You unequivocally share responsibility for this avoidable tragedy.”