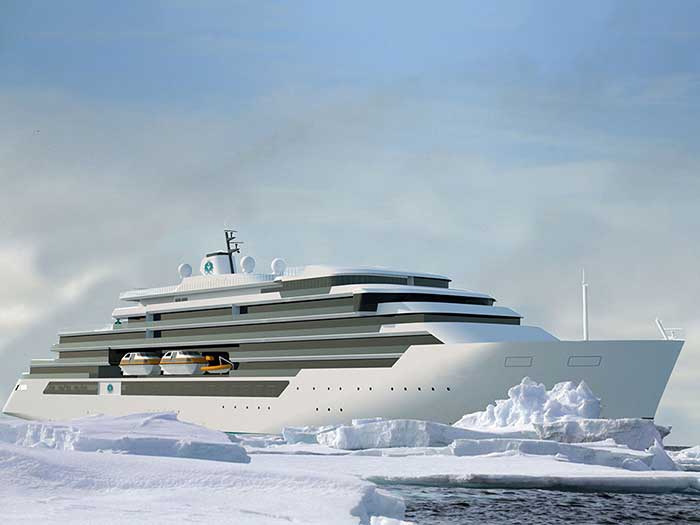 The agreement covers parts of the basic design of the 20,000 gt of the “Endeavor” class luxury expedition yachts to built at MV Werften’s Stralsund, Germany, shipyard, along with design, purchasing and production assistance. Production of the ships will start in late 2017 with deliveries starting on spring 2019.

“We are excited to build a series of the world’s first purpose-built expedition yachts, with PC6 polar-class designation,” said MV Werften Managing Director Jarmo Laakso. “Our own staff at all sites and other subcontractors have already been fully involved in this project. Foreship has proven to be a strong and reliable cooperation partner in numerous similar large-scale projects and will be a valued support in addition to our own workforce.”

Foreship is a leading cruise ship design and engineering specialist that has been involved in projects such as Quantum of the Seas for Royal Caribbean, Norwegian Breakaway for Norwegian Cruise Line and Mein Schiff 3 and Mein Schiff 4 for TUI Cruises.

Measuring about 160 m long and 23 m wide, the Endeavor class vessels for luxury cruise line Crystal Cruises will be the world’s largest and most spacious expedition yachts.

They can accommodate up to 200 passengers in 100 suites and the same number of crew and are designed to operate mainly in Arctic and Antarctic regions and to cruise in the tropical regions when traveling between the poles.

“A new era in shipbuilding is being rung in at the MV Werften. This is an important day for the shipyards in the country,” said Harry Glawe, Economics Minister of Mecklenburg-Vorpommern at the signing ceremony. “Hundreds of jobs are being secured and created. We are pleased about Genting’s looming long-term commitment in our country.”

The MV Werften agreement with Foreship follows the August 18 signing of the owners’ architect agreements for the Endeavor project with design companies Tillberg Design, AD Associates and Kudos Dsign and with Tillberg Design, SMC and Kudos Design on the 201,000 gt Global class vessels that be over 340 m long and 45 m wide. Steel cutting for the first Global Class vessel at MV Werten is expected to begin in late 2017 and delivery is scheduled for 2020.

The MV Werften order book includes a total of ten vessels in the next five years and the shipyard group is currently increasing its in-house capacity and competence in project management, design, planning, purchasing and production. at all three of its shipyards in Wismar, Rostock and Stralsund in the German state of Mecklenburg-Vorpommern (MV).