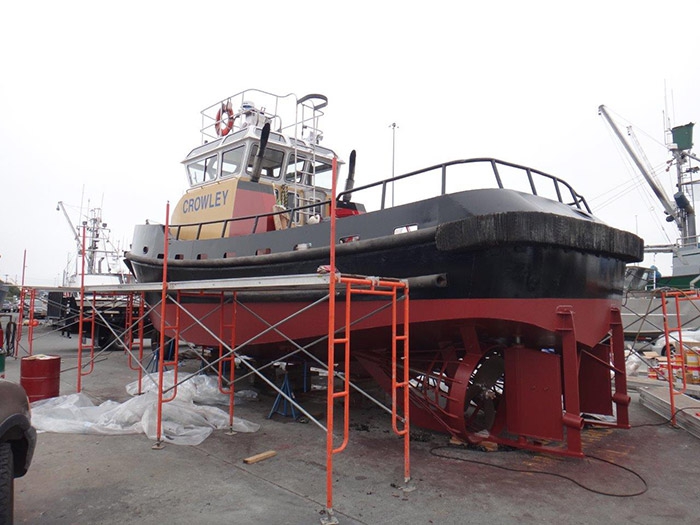 AUGUST 2, 2018 — Shipbroker Marcon International, Inc., Coupeville, WA, reports its that sales and charters this year have already surpassed its total 2017 numbers, with 25 sales and one 2,780 nm long-distance tow fixed so far. A 5,000 HP ASD tug was also extended on a previously arranged long-term contract. Several additional sales are pending.

The 207.0′ x 40.0′ x 16.8′ Endurance was originally built as one of four sister-vessels for Zapata Gulf Marine Corp. in 1978 by shipbuilder Campbell Industries of San Diego. Crowley operated the ABS +A1 Towing classed vessel for the last eighteen years as an oil spill response / escort vessel. The 920 tdw vessel is fitted with a Smatco double drum tow winch and is powered by twin EMD 16-645E7A diesels developing a total of 5,750HP at 900RPM with controllable pitch props in kort nozzles. Bollard pull is abt. 82 t.

Roger G and Gus E are small, steel hull sister tugs with aluminum pilot houses built in 2000 by Rozema Boat Works of Mt. Vernon, WA, for Crowley to work as line-handling and barge assist tugs in Alaska. The tugs each measure 44′ x 16′ x 8.7′ and are powered by a pair of CAT 3306B main engines producing a total of about 500 BHP per boat, Twin Disc 5091 gears and fixed pitch props.

Marcon International has sold a number of vessels and barges over the years to Paradigm Marine. This is the third OSV and 13th and 14th tugs sold by Marcon this year, and the 79th AHTS sold totaling 374,038BHP sold in the last 37 years.

Two of the units, Barge 450-6 and Barge 450-7 were built in 1981 by FMC Corp. of Portland, OR, while Barge 450-1, Barge 450-3 and Barge 450-8 were built by Bethlehem Steel Corp. in San Francisco, California in 1975, 1976 and 1981 respectively. The five barges were purchased by several operators for further trading in non-petroleum service. Over the years, Crowley’s 450 series petroleum barges have carried gasoline, diesel, jet fuel, chemicals and crude oil at virtually all ports from the North Slope of Alaska to the Caribbean, including the U.S. West, Gulf and East Coasts until they were replaced by new OPA’90 double hull AT/B barges ranging from 20,000 to 45,800dwt.

Marcon acted as sole broker in all eight of the above transactions.

Since the sale of the oil rig supply boat Gulf Mariner in 1986, Marcon has handled well over 100 sales, charters and purchases of various vessels and barges on behalf of Crowley, including the previous sales of the sister-barges 450-2 and 450-12 sold to Nigeria and Sweden respectively.