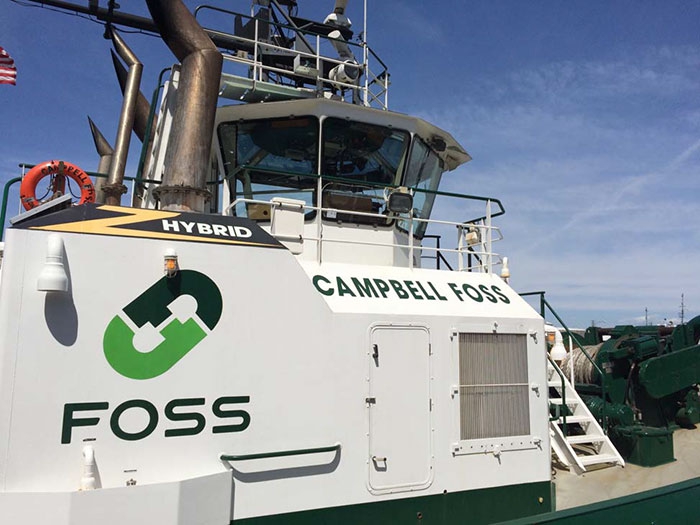 JULY 6, 2016 — The U.S. Maritime Administration has just released a report that should be required reading for anyone considering operating a battery-hybrid vessel.

In August of 2012, an explosion and fire occurred in one of the lithium‐polymer batteries on the Foss hybrid tug Campbell Foss. Subsequent to that fire, Foss removed the remaining batteries from the Campbell Foss and all of the lead‐acid batteries on its other hybrid tug, Carolyn Dorothy.

Foss then undertook an evaluation of the design and construction of new battery components, as well as the risks and benefits of battery use in the power plant of a hybrid tugboat.

The assessment looked at the benefits and risks associated with the reinstallation of batteries as part of the vessel’s hybrid power system. It showed that a refined design with explosion protection, structural separation from occupied spaces, specialized battery controls, and shutdown protocols improved the risk profile for the hybrid power system.

The assessment also demonstrated that without the battery array, the hybrid system would not achieve the tug’s full performance requirements nor the emissions and fuel consumption reductions made possible by hybrid technology.

The modifications were made, batteries were reinstalled and now both tugs are operating in full hybrid mode with batteries functioning and fully integrated into the system. The hybrid vessels continue to show a significant reduction in emissions compared with the conventional tugs operating in the same harbor.

Though the story has a happy ending, getting there presented the usual real life challenges.  To get the full story, read MARAD’s report HERE