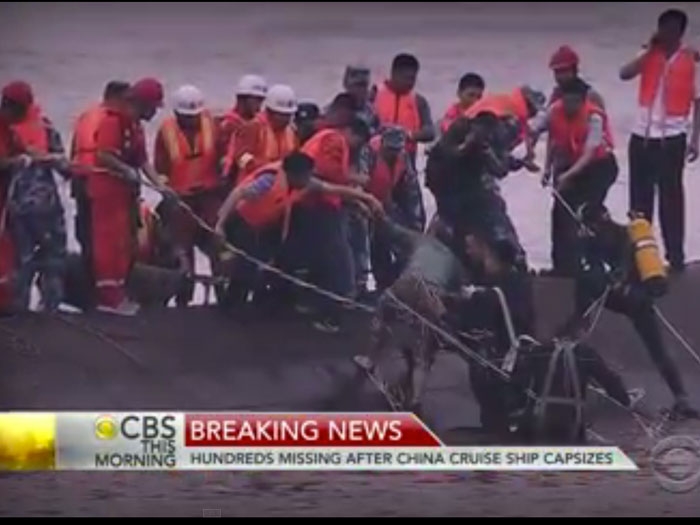 JUNE 2, 2015 — Fifteen people have been rescued and five were confirmed dead after a passenger vessel carrying over 450 people capsized in China’s Yangtze River, reports China’s Xinhua news agency. Reportedly, the passengers were mostly elderly, some being accompanied by grandchildren.

The river cruise ship, whose name translates as Eastern Star, or Oriental Star, capsized after being caught in a cyclone at around 9:28 p.m. Monday on the Jianli section of the Yangtze River in Hubei Province. Many passengers were likely trapped in their cabins when disaster struck.

Statistics from the Ministry of Transport show that there were a total of 456 people onboard, including 405 passengers, 46 crew members and five tourist guides.

A massive rescue effort is underway, with the Chinese Navy sending 140 divers.

Chinese Premier Li Keqiang has been on scene personally, calling for “all-out efforts” to save lives.

Xinhua says three divers found one 21-year-old man in a small compartment Tuesday afternoon, he was given breathing apparatus and was able to swim out by himself. Rescue efforts have been complicated by the i layout of the vessel, as well as strong wind and heavy rain.

One elderly woman was also pulled out of the hull by divers and later reports said a total of 15 people had been rescued from the capsized ship, with another five confirmed dead. Rescuers said there could be more survivors.

According to China’s CCTV, the ship is over 76 meters long, and 11 meters wide and weights 2,200 tons. It is designed to be able to carry over 540 passengers. “Prior to this disaster, it was one of the best passenger ships in China, equipped with hi-tech navigation devices and entertainment facilities  The ship was once praised by the Chinese Transport Ministry for its good performance and services,” says CCTV.

The “Eastern Star” was owned by the Chongqing Eastern Shipping Corporation, which specializes in tourist routes in the popular Three Gorges river canyon region.