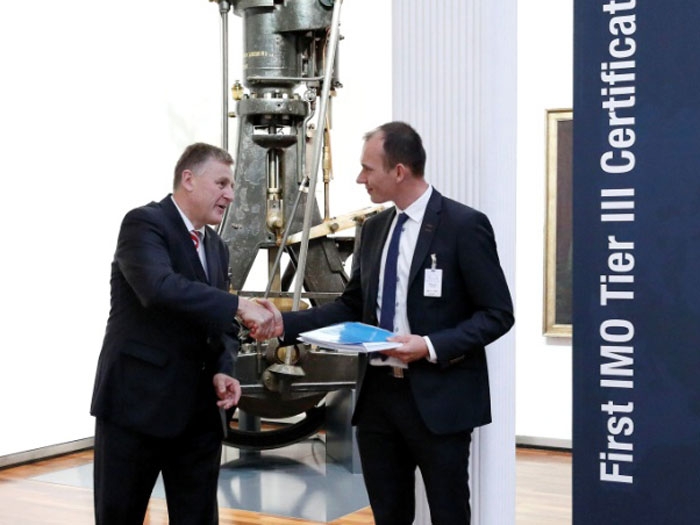 Kasper Moos, Head of the Technical Organization at DFDS (right) congratulates Arnd Löttgen, Member of the Executive Board, MAN Diesel & Turbo (left) at the ceremony marking the awardi of the Tier III-compatibility certificate from DNV GL

SEPTEMBER 22, 2014 —  DNV-GL has awarded MAN Diesel & Turbo has been awarded a Tier III-compatibility certificate for the MAN 8L21/31 four-stroke engine with a retrofitted SCR (Selective Catalytic Reduction) system aboard a DFDS Seaways ship.

The DFDS vessel, the Petunia Seaways is a cargo ship that sails a regular North Sea route between Gothenburg, Sweden, and Immingham, England, and Ghent, Belgium.

Since September 2012, when one of its 8L21/31 auxiliary engines was retrofitted with a SCR system, Petunia Seaways has played a major role in the testing of SCR technology. The system has demonstrated daily that freight ships can now meet the strict emission levels laid down by IMO Tier III where NOx emissions have to be reduced in certain areas by 75% compared to current limits.

“For the last 8,800 hours, this particular auxiliary engine of the Petunia Seaways has consistently met Tier III NOx limits under real life operating conditions and in full accordance with the rules,” says Dr. Daniel Struckmeier, Senior Project Manager Emission 2016 at, MAN Diesel & Turbo
.
The SCR method injects urea into the exhaust gases and passes them through a catalytic converter at a temperature of 300 to 400 degrees Celsius. The subsequent, chemical reaction reduces the undesired nitrogen oxides(NOx) by over 80%.

The SCR system consists of a catalytic converter with several control units and a surveillance and control unit.

Results on the test bed and at sea have been impressive and shown that SCR technology is reliable and ready for commercial production and operation. MAN Diesel & Turbo has already made the basic version of the SCR system available for all four-stroke engines, from those powering the largest cruise ships, to ferries and specialized ships, to small, coastal vessels.

“It is important that we have proven to fulfil the same high standards that will be demanded by Tier III in the future,” said Prof. Dr. Gunnar Stiesch, Head of Advanced Engineering & Exhaust After treatment Four-Stroke Engines.

“I am happy that we have helped develop a new, environmentally friendly technology. DFDS and other operators are definitely going to benefit from SCR meeting international standards,” said Poul Woodall, Director of Sustainability & Public Affairs at DFDS Seaways.