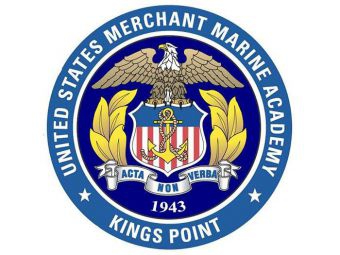 “This isn’t just about looking back over the last 75 years,” said Capt. James Tobin, President of the USMMA Alumni Association and Foundation (AAF). “It’s to remind the nation how vital this institution is to both our national security and global commerce, and of the importance of maritime security in turbulent times.”

The campaign comes at a time when policymakers are increasingly concerned about China’s massive spending on its merchant marine and the U.S.’s disconcerting shortfall of qualified, committed mariners who can serve the nation in times of crisis. Along with graduates of the other four federal service academies, USMMA alumni are obligated to serve in the military. Over 80% of the US Navy Reserve Strategic Sealift Officers force attended USMMA, and thus play an increasingly crucial role in defense readiness.

On June 16, Secretary of Defense James N. Mattis delivered the commencement address at the Academy’s Kings Point, NY campus to reaffirm the vital role the graduates will have in national defense.

“And I think whether you’re going to be at shore or at sea, you’re going to bind the muscles of American commerce and that’s a simple reality because as small as our Merchant Marine may be today, it is absolutely essential,” Secretary Mattis said to the graduates. “It’s in every war plan I review, I guarantee you, because you’re going to be the fourth arm of defense.”

“Secretary Mattis has a keen understanding of the role of the Academy,” Tobin said. “With our Washington-focused campaign, we will build upon his words to make sure every policymaker understands how we fit into defense readiness.”

Although the U.S. government has supported maritime training since 1874, Congress ultimately realized there was a critical need to ensure high quality, standardized maritime training and passed the Merchant Marine Act in 1936. It wasn’t until 1943, however, that the academy was formally established, as President Roosevelt said when he spoke at its opening, “to serve the Merchant Marine as West Point serves the Army and Annapolis the Navy.”

Like the other four federal academies (West Point, Naval Academy, Air Force Academy, Coast Guard Academy), USMMA was created by statute. These five academies are the only undergraduate institutions of higher education that are part of the federal government.

USMMA is the only school in which 100% of graduates earn a merchant marine license and incur an obligation to the U.S. government. USMMA graduates play a vital role in maintaining the maritime strength and security of the nation, making up more than 80% of the Strategic Sealift Officer Program force.

Without such a force of fully trained merchant mariners with a mandated obligation to serve where and when needed, the U.S. would be forced to outsource carrying troops and materials to foreign mariners, whose national or personal interests might be at odds with U.S. policy.

Students of the USMMA come from diverse backgrounds and almost every state in the nation. In addition to meeting rigorous academic and physical requirements for admission, applicants must be nominated by a U.S. Representative or Senator. All midshipmen must pass the U.S government’s requirements for a security clearance.

All midshipmen complete additional course requirements in the sciences, mathematics, humanities, and Naval Science for a Bachelor of Science degree.

The motto “The World is Our Campus” is emblematic of Sea Year, the academy’s signature training program. Mandated by Congress, Sea Year is an immersive program in which midshipmen are assigned to commercial vessels as officers in training to learn maritime skills in a real-world environment. Sea Year is unique to USMMA – nothing comparable is offered at any other college or university, including the four other federal service academies.

USMMA midshipmen complete a four-year program that includes accumulating 164 credit hours during their three years at the Academy and their 12 months of hands-on training at sea. During Sea Year, midshipmen must earn at least 21 academic credits while training on a diverse portfolio of vessels such as container ships, roll-on-roll-off ships, bulk grain and ore ships, and oil tankers.

In place since the Academy’s founding in 1943, this partnership between the Academy and commercial shipping companies that take midshipmen aboard their ships for training has been one of the most successful and enduring public-private partnerships in U.S. history.