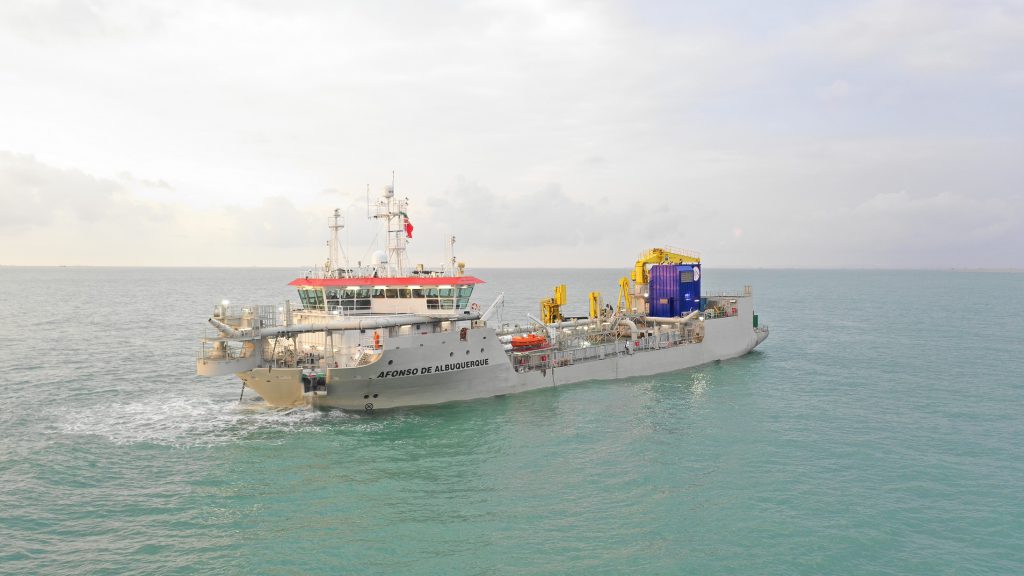 The dredge, named Afonso de Albuquerque, is the first of three ultra-low emission trailing suction hopper dredges (TSHD) on order for Belgium’s Jan De Nul Group. The second and third are expected to be delivered later this quarter.

The vessels are diesel-electric: all major drives (thrusters, dredge pump, jet pumps…) are electrically driven, and controlled by frequency converters. In this way each system can operate at its optimal speed and power. Power is generated by three diesel generator sets; a control system automatically starts and stops the sets depending on the power requirement, and by means of asymmetric load sharing load is optimally distributed over the diesel generator sets. All these measures result in a low fuel oil consumption, which is the best in its class.

At the time the vessels were ordered, Jan de Nul said that, as they would frequently operate near residential areas, it had decided to limit NOx emissions to a level far below the actual requirements, and to reduce other contaminants currently not regulated by IMO.

The new vessels will operate with normally available fuel oil, with the exhaust gases being treated by means of a Selective Catalytic Reduction (SCR) system, and a Diesel Particulate Filter (DPF).

Afonso de Albuquerque is able to dredge to a maximum depth of 27.6 m and has a hopper capacity of 3,500 cu.m.

Designed with a shallow draft and high maneuverability, the TSHD is suitable for work in confined areas. The dredge will be used for dredging loose and soft soils such as sand, gravel, silt or clay. The dredged material can be deposited on the seabed through bottom doors or discharged through a floating pipeline to shore and used for land reclamation.